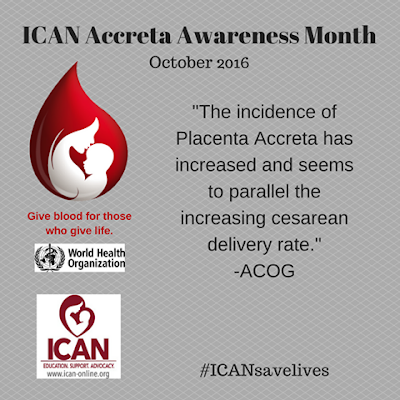 October is Accreta Awareness Month. The International Cesarean Awareness Network (ICAN) is featuring Accreta Awareness as part of its focus this month, and is promoting the importance of donating blood in order to help women who experience accretas.

You can read more about Placenta Accreta in my series about it here:


Accretas have several different risk factors, including maternal age, parity, smoking, infection, pregnancy after fertility treatment, and prior uterine procedures such as D&C or fibroid removal.


The risk of AIP [abnormally invasive placenta] increased seven-fold after one prior caesarean section (CS) to 56-fold after three or more CS.

Many accretas occur in women who have a cesarean in their first pregnancy and are automatically scheduled for repeat cesareans thereafter. Women who have larger families are particularly impacted. Yet many of these women say that they were never counseled about the risk of accreta with repeat cesareans. This is wrong. Informed consent should include discussions of all the risks of both VBAC and repeat cesareans.

Alarmingly, the incidence of placenta accreta cases seems to be on the rise. As noted by ACOG in the graphic above, this is likely in response to the rising cesarean rates. This reflects an increase in both primary cesareans and routine repeat cesareans as a result of de facto VBAC bans.

The increase in accretas is not just a U.S. phenomenon. A recent study from Hong Kong, where there is a high underlying cesarean rate, demonstrates that the rate of accreta increased over time as the cesarean rate increased. The authors note:

For such a rare condition, that's a significant increase. A similar result was found in an Italian region with a strong increase in cesarean rates over the years. Researchers found that:


The incidence of placenta accreta has increased 13-fold since the early 1900s and directly correlates with the increasing cesarean delivery rate.

If we hope to reduce the number of women impacted by accretas, we must reduce the cesarean rate. The authors of the recent Nordic study pointed this out, saying:


Our findings indicate that a lower CS rate in the population may be the most effective way to lower the incidence of AIP [Abnormally Invasive Placenta].

Of course, it's only fair to note that most women who have higher-order cesareans will not experience an accreta. However, accreta is such a serious and life-threatening condition that even relatively small incidences carry a huge burden of complications, cost, and potential loss of life. That's why it is vital that women have balanced risk counseling after a prior cesarean and real access to VBAC if they want it.

This is the bottom line. Real women have died because of accretas, leaving their children motherless. Others have lost their uterus to hysterectomy or their babies to prematurity. Although I have not personally known anyone who died from accreta, I have known several women who have had very close near-misses due to accreta. Nearly all lost their uteri as a result of their accreta, and some lost their babies as well.

This is the real consequence of a too-high cesarean rate. This is why it's so important to avoid non-indicated cesareans and improve VBAC access.

*If you can, give blood to help support women who have been affected by accreta.


Rates of cesarean delivery have substantially increased worldwide during the past 30 years. Indeed, almost one-third of deliveries in the United States are cesareans. Most cesareans are safe, and major complications are uncommon. However, there is a "concealed" downside to cesarean deliveries. There are rare but life-threatening morbidities that may occur, which are often overlooked because most cesareans go well. In addition, subsequent pregnancies are fraught with an increased risk of both maternal and fetal complications. The worst of these are associated with placental problems such as previa, abruption, and accreta. The risk dramatically worsens in patients with multiple repeat cesarean deliveries. This article will summarize and highlight the implications of the rising cesarean rate on maternal and fetal morbidity and mortality.


Placental disorders such as placenta previa, placenta accreta, and vasa previa are all associated with vaginal bleeding in the second half of pregnancy. They are also important causes of serious fetal and maternal morbidity and even mortality. Moreover, the rates of previa and accreta are increasing, probably as a result of increasing rates of cesarean delivery, maternal age, and assisted reproductive technology....


OBJECTIVE: The objective was to investigate prevalence, estimate risk factors, and antenatal suspicion of abnormally invasive placenta (AIP) associated with laparotomy in women in the Nordic countries. DESIGN: Population-based cohort study. SETTING AND POPULATION: A 3-year Nordic collaboration among obstetricians to identify and report on uterine rupture, peripartum hysterectomy, excessive blood loss, and AIP from 2009 to 2012 The Nordic Obstetric Surveillance Study (NOSS). METHODS: In the NOSS study, clinicians reported AIP cases from maternity wards and the data were validated against National health registries. MAIN OUTCOME MEASURES: Prevalence, risk factors, antenatal suspicion, birth complications, and risk estimations using aggregated national data. RESULTS: A total of 205 cases of AIP in association with laparotomy were identified, representing 3.4 per 10 000 deliveries. The single most important risk factor, which was reported in 49% of all cases of AIP, was placenta praevia. The risk of AIP increased seven-fold after one prior caesarean section (CS) to 56-fold after three or more CS. Prior postpartum haemorrhage was associated with six-fold increased risk of AIP (95% confidence interval 3.7-10.9). Approximately 70% of all cases were not diagnosed antepartum. Of these, 39% had prior CS and 33% had placenta praevia. CONCLUSION: Our findings indicate that a lower CS rate in the population may be the most effective way to lower the incidence of AIP. Focused ultrasound assessment of women at high risk will likely strengthen antenatal suspicion. Prior PPH is a novel risk factor associated with an increased prevalence of AIP.


OBJECTIVE: To estimate the incidence of multiple repeat caesarean section (MRCS) (five or more) in the UK and to describe the outcomes for women and their babies relative to women having fewer repeat caesarean sections. DESIGN: A national population-based prospective cohort study using the UK Obstetric Surveillance System (UKOSS). SETTING: All UK hospitals with consultant-led maternity units. POPULATION: Ninety-four women having their fifth or greater MRCS between January 2009 and December 2009, and 175 comparison women having their second to fourth caesarean section. METHODS: Prospective cohort and comparison identification through the UKOSS monthly mailing system. MAIN OUTCOME MEASURES: Incidence, maternal and neonatal complications. Relative risk, unadjusted (OR) and adjusted (aOR) odds ratio estimates. RESULTS: The estimated UK incidence of MRCS was 1.20 per 10 000 maternities [95% confidence interval (CI), 0.97-1.47]. Women with MRCS had significantly more major obstetric haemorrhages (>1500 ml) (aOR, 18.6; 95% CI, 3.89-88.8), visceral damage (aOR, 17.6; 95% CI, 1.85-167.1) and critical care admissions (aOR, 15.5; 95% CI, 3.16-76.0), than women with lower order repeat caesarean sections. These risks were greatest in the 18% of women with MRCS who also had placenta praevia or accreta. Neonates of mothers having MRCS were significantly more likely to be born prior to 37 weeks of gestation (OR, 6.15; 95% CI, 2.56-15.78) and therefore had higher rates of complications and admissions. CONCLUSIONS: MRCS is associated with greater maternal and neonatal morbidity than fewer caesarean sections. The associated maternal morbidity is largely secondary to placenta praevia and accreta, whereas higher rates of preterm delivery are most likely a response to antepartum haemorrhage.

Cesarean delivery is now the most common operation in the United States, and it has increased dramatically from 5.8% in 1970 to 32.3% in 2008. This rise has not resulted in significant improvement in neonatal morbidity or maternal health. Three recent studies of elective repeat cesarean deliveries performed before 39 completed weeks of gestation have demonstrated increased respiratory and other adverse neonatal outcomes. Maternal mortality in the United States has increased from 10 per 100,000 to 14 per 100,000 from 1998 to 2004. Contributing to this in an increasing incidence of placenta accreta associated with multiple uterine scars requiring the need for emergency cesarean hysterectomy, blood transfusion, and maternal mortality due to obstetric hemorrhage. To reverse the trend of the rising cesarean delivery rate, obstetricians must reduce the primary rate and avoid the performance of a uterine incision unless absolutely necessary for fetal or maternal indications. For women with one previous low transverse cesarean delivery, obstetricians should promote a trial of labor after previous cesarean delivery in those women who desire three or more children.