Even "Complicated" Pregnancies Should Labor Whenever Possible 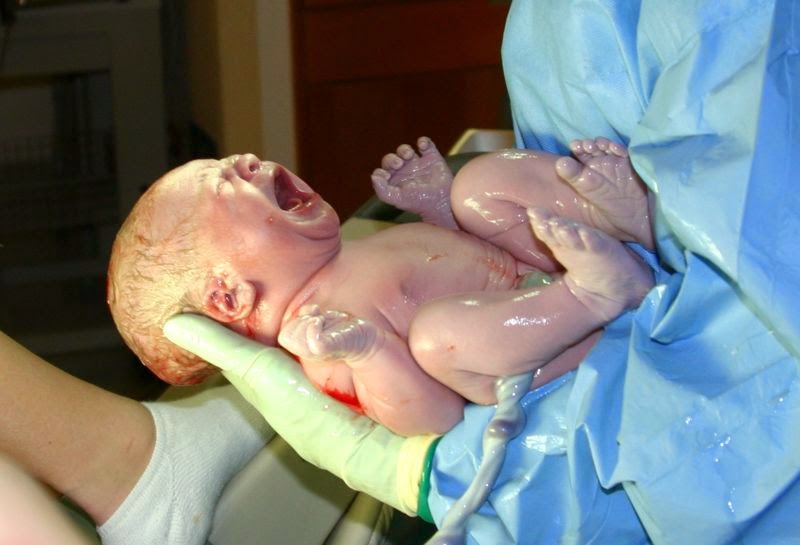 There's an interesting new study out from Finland.

I haven't read the full study yet, but from the abstract it looks like the gist is that even in "complicated" pregnancies, women should be given a chance to labor and have a vaginal birth, not just scheduled for a cesarean.

Many times, in "complicated" pregnancies, there are care providers who believe that there is no point in "trying" for a vaginal birth. They just plan to do a cesarean before labor. They feel they will minimize maternal morbidity that way.

Not all providers are like this, by any means, but there certainly are quite a few out there that just jump from "complicated" to "planned cesarean."

This very large study shows that the best outcomes were associated with planning a vaginal birth.

Of course, each case has to be judged on an individual basis. This study doesn't mean that a planned cesarean is never appropriate; just that outcomes were better on a population-wide basis if the women were usually given the chance to have a vaginal birth.

The only exception was in pre-eclampsia, which in severe cases can sometimes have very poor outcomes. But outcomes in women with pre-eclampsia were equivalent between vaginal birth and planned cesarean...so you could certainly make a case for laboring there too, as long as the condition of the mother and the baby allow it.

METHODS: A register-based study including all women having singleton delivery in Finland in 2007-2011, n = 292,253, data derived from the Finnish Medical Birth Registry and Hospital Discharge Registry. Diagnoses and interventions indicating a severe maternal complication were searched and the mode of delivery was assessed by data linkage. The impact of obesity, maternal age 35 years or more, pre-eclampsia and insulin dependent diabetes on severe maternal morbidity (all severe complications, severe infections and severe) was studied in each mode of delivery and calculated as Odds ratios.

Posted by Well-Rounded Mama at 8:24 PM No comments:


Here is yet another study that confirms the potential risks of extreme restrictions of prenatal weight gain in women of size.

In this study done by the prestigious MFMU Network, gestational weight loss or a very low weight gain (less than the 11-20 lbs. recommended by the Institute of Medicine) in "obese" women was associated with about twice the rate of Small-for-Gestational-Age (SGA) babies.

This is a concern because SGA babies are at higher risk for metabolic disease as they grow older, including insulin resistance, diabetes, abdominal fatness, the metabolic syndrome, and cardiovascular disease.

In the rush to "cure" obesity, are care providers increasing the next generation's risk for the very conditions they are trying to prevent?

Alarmingly, many clinicians continue to advise high-BMI women to gain little or no weight in pregnancy (even with twins), and some are still telling women of size to lose weight during pregnancy.

This study joins several others that should indicate that extreme prenatal weight gain restriction is not advisable.


OBJECTIVE: We sought to evaluate inadequate gestational weight gain and fetal growth among overweight and obese women. STUDY DESIGN: We conducted an analysis of prospective singleton term pregnancies in which 1053 overweight and obese women gained >5 kg (14.4 ± 6.2 kg) or 188 who either lost or gained ≤5 kg (1.1 ± 4.4 kg). Birthweight, fat mass, and lean mass were assessed using anthropometry. Small for gestational age (SGA) was defined as ≤10th percentile of a standard US population. Univariable and multivariable analysis evaluated the association between weight change and neonatal morphometry. RESULTS: There was no significant difference in age, race, smoking, parity, or gestational age between groups. Weight loss or gain ≤5 kg was associated with SGA, 18/188 (9.6%) vs 51/1053 (4.9%); (adjusted odds ratio, 2.6; 95% confidence interval, 1.4-4.7; P = .003). Neonates of women who lost or gained ≤5 kg had lower birthweight (3258 ± 443 vs 3467 ± 492 g, P < .0001), fat mass (403 ± 175 vs 471 ± 193 g, P < .0001), and lean mass (2855 ± 321 vs 2995 ± 347 g, P < .0001), and smaller length, percent fat mass, and head circumference. Adjusting for diabetic status, prepregnancy body mass index, smoking, parity, study site, gestational age, and sex, neonates of women who gained ≤5 kg had significantly lower birthweight, lean body mass, fat mass, percent fat mass, head circumference, and length. There were no significant differences in neonatal outcomes between those who lost weight and those who gained ≤5 kg. CONCLUSION: In overweight and obese women weight loss or gain ≤5 kg is associated with increased risk of SGA and decreased neonatal fat mass, lean mass, and head circumference.