Just had to share this. Excellent work, Kristen Bartlett and Ashley Nicole Black! You hit all the top points we've been making for years, with humor and no holds barred. Great job! And thank you Samantha Bee for bringing their work forward to a national platform.

*Warning: Salty language and off-color humor, if you prefer to avoid that sort of thing
Posted by Well-Rounded Mama at 7:38 PM No comments:

VBAC and Prior Cervical Dilation

Some providers look for any excuse to discourage people from Vaginal Birth After Cesarean (VBAC). They might tell you that you're not a good candidate for VBAC because you are too old, too fat, too short, that you have to have your baby before your due date, that you've gained too much weight, and on and on.

One of the tools that is sometimes used to discourage VBAC is the prior dilation in the previous labor. Some have been told that if they dilated nearly all the way or even all the way to 10 cm, they have little or no chance at a VBAC. Others have been told the opposite, that if they didn't dilate very far previously, their chances of VBAC are low.

But what does the research actually say?

Prior Dilation and VBAC

A New York study (Hoskins and Gomez 1997) was one of the first studies to look at prior dilation and its association with later VBAC. It found a much greater VBAC rate in those who had a c-section at lower dilation. The VBAC rate at later dilation was only 13%.

However, this is the only study I could find that had more VBACs in the group with less dilation. But because this 1997 study was the first one to really examine the question, its findings have stuck in many doctors' memories, despite contradictory studies, so you sometimes still hear this argument.

A small Nigerian study (Onifade and Omigbodun, 2003) found that prior dilation had no influence on later VBAC. They concluded, "the maximum cervical dilatation reached before primary caesarean section need not be factored into a decision for VBAC."

On the other hand, most studies have found that the greater your dilation in a previous labor, the better your chances at a subsequent VBAC.

One 2001 Canadian study found a higher VBAC rate (75%) among those whose cesareans occurred after dystocia in the second stage of labor/after full dilation. Do note, though, that the group where dystocia occurred in the first stage still had a 66% VBAC rate.

A Korean study (Kwon 2009) also found that those with greater prior dilation had more VBACs.

A Danish study (Abildgaard 2013) had a very low overall VBAC rate but even so found more VBACs in those with greater prior dilation. N=373 women had a Trial of Labor. Those with 4-8 cm dilation before their first cesarean had a 39% VBAC rate, whereas those who were fully or nearly fully dilated at cesarean had a 59% VBAC rate.

And now, a new study (Lindblad Wollman 2018) also suggests that the chance of VBAC is increased with greater prior dilation. This was a large population-based cohort study in Sweden for 6 years from 2008-2014; such a large study gives its findings extra heft.  N=3,116 women with 1 prior cesarean had a Trial of Labor (TOL). 70% had a VBAC. In those who had a prior cesarean for dystocia:

CONCLUSIONS: Almost 70% of all women eligible for trial of labor after cesarean had a vaginal birth, even women with a history of labor dystocia had a good chance of success. A greater cervical dilation in the first delivery ending with a cesarean was not in vain, since the chance of vaginal birth in the subsequent delivery increased with greater dilation.

Overall, the research suggests pretty strongly that the more dilation you had previously, the better your likelihood for a VBAC later. Why might that be? Perhaps the key is how ripe the mother's cervix was before labor (a ripe cervix dilates more easily), and that once you've fully dilated once, you're likely to again.

What it doesn't mean is that someone who didn't dilate very far the first time is a bad candidate for a VBAC. As the Swedish study above points out, "even women with a history of labor dystocia had a good chance of success."

But really, in the end, who cares how many centimeters you dilated last time? The point is that with patience and a supportive provider, most people will have a VBAC, regardless of risk factors. That's all you really need to know. 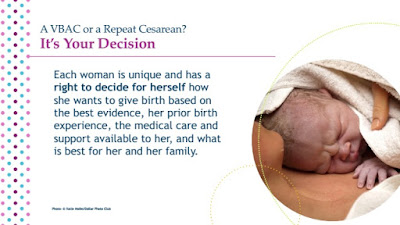 As the top graphic of this post points out, VBAC is woefully underused. About 90% of those with prior cesareans are eligible for a VBAC, yet only about 10% end up having one. Yes, some people choose repeat cesareans, and some people labor for a VBAC but end up with another cesarean. However, the biggest reason for the low number of VBACs is because VBAC has been strongly discouraged by many providers.

Some providers won't support VBAC at all. Others pretend to be supportive but place so many limitations on a trial of labor that almost no one gets a VBAC. Others limit trials of labor to only those with the MOST favorable risk factors.

Providers, stop making excuses. Don't use prior cervical dilation or past arrest disorder or gestational age or Body Mass Index or maternal age or any of a thousand other lame excuses to discourage people from a VBAC.

Arbitrarily limiting VBAC to those with only the most favorable factors makes the repeat cesarean rate far too high, results in far too many complications, and does more harm than good. Our skyrocketing rate of placental abnormalities, cesarean scar pregnancies, and maternal mortality rates reflect that.

Sure, certain factors may make a VBAC slightly more or less likely, but the stark truth is that the majority of those who labor will have a VBAC, even when there are less favorable risk factors.

Stop looking for excuses to not support VBAC. Stop the high-handed paternalism that peremptorily decides birthing choices for others. Stop infantalizing women and taking away their autonomy to make their own medical decisions. People should be counseled about the benefits and risks of each option, but in the end the final choice belongs to the mother.

Unless someone has a legitimate medical contraindication, stop discouraging people from pursuing a VBAC if they want one.


... We investigated the association between indication of first cesarean and cervical dilation during labor preceding the first cesarean and risk of repeat cesarean in women undergoing trial of labor. MATERIAL AND METHODS: A population-based cohort study using electronic medical records of all women delivering in the Stockholm-Gotland region, Sweden, between 2008 and 2014. The population consisted of 3116 women with a first cesarean undergoing a trial of labor with a singleton infant in cephalic presentation at ≥37 weeks of gestation... In women with a cesarean due to dystocia, increasing cervical dilation in first labor decreased the risk of repeat cesarean in second labor. The adjusted RR of repeat cesarean was 2.48 with dilation ≤5 cm, 1.98 with dilation 6-10 cm, and 1.46 if fully dilated. CONCLUSIONS: Almost 70% of all women eligible for trial of labor after cesarean had a vaginal birth, even women with a history of labor dystocia had a good chance of success. A greater cervical dilation in the first delivery ending with a cesarean was not in vain, since the chance of vaginal birth in the subsequent delivery increased with greater dilation.


... Relevant records of the index pregnancy (group I) were reviewed for cervical dilatation at cesarean delivery, oxytocin use, indication, neonatal weight, and epidural use. The records of the subsequent pregnancy (group II) were reviewed for successful VBAC rates, neonatal weight, oxytocin, and epidural use. RESULTS: There were 1917 patients in the study. The indications for cesarean in group I were ... arrest disorders (80%)... In those with previous cesarean deliveries for arrest disorders with cervical dilatation at 5 cm or less, the VBAC success rate was 67%. It was 73% for 6-9 cm dilatation and 13% for the fully dilated group (P < .05). CONCLUSIONS: Patients who attempt a VBAC may be counseled that a cesarean delivery at full dilatation is associated with a reduced chance of a subsequent successful VBAC.

Posted by Well-Rounded Mama at 6:36 PM No comments: