Bigger Dose of Antibiotics Needed For Women of Size? 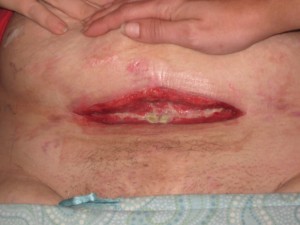 It's time to finish our focus this Cesarean Awareness Month on the over-utilization of cesareans in women of size and the burdens this high rate imposes on this group.

Consider a new study just out that suggests that women of size might benefit from a bigger dose of antibiotics if they undergo a cesarean.

This further supports the idea of the importance of weight-based dosing of certain types of antibiotics when people of size undergo other surgeries as well.

Wound infection is a very significant risk of cesarean sections in women of size, especially "morbidly obese" women.  Part of the reason for this is that adipose tissue tends to be poorly vascularized and oxygenated, which makes it harder for that area to heal as effectively.

However, another reason for a higher infection risk may be that "obese" women are being under-dosed with antibiotics when standardized dosing (the same for all weights) is used instead of weight-based dosing.

In this new study, the same standardized antibiotic regime was given to all women (regardless of size) undergoing a planned cesarean delivery.  Women were categorized by BMI, and then tested to see how well the dosage was working at different times during the delivery (incision time, closure time).

The antibiotic dosage was fine for everyone for gram-positive bacteria, but the story was considerably different for gram-negative bacteria.

So by the end of the surgery, nearly HALF of the women with BMI greater than 40 did not have enough concentration of antibiotics in their tissue to effectively ward off a gram-negative infection.

Reflections on the Study

For years, doctors have blamed all kinds of factors for the higher rate of wound infection in fat women. And to be fair, many of these factors are relevant.

However, this study shows it's likely that fat women also have higher rates of wound infections because their doctors are inadvertently underdosing them with antibiotics.

We in the fat acceptance community have been telling them this for years, but on the whole doctors have been very slow to listen and heed our feedback. Why has it taken the medical community so long to listen?  Will this study finally change the standard of care?

Only time will tell...but I'm not holding my breath.  In the meantime, in light of just how high the cesarean rate (both planned and unplanned) is among women of size in the USA....consider the implications of such an excessive cesarean rate for infectious burden, healthcare costs, and disruptions to the mother's life just as she is trying to bond with her newborn.

The lessons from this study are twofold.

First, for when a "morbidly obese" mother truly needs a cesarean, doctors should explore weight-based dosing with certain types of antibiotics, and then study this practice to see if this lessens the risk of infection.

Second, because the risk for infection/wound complications is increased in "morbidly obese" women, doctors should stop doing things that increase the cesarean rate in this group.  For example, doctors need to stop scheduling this group for routine "elective" cesareans, and stop practices (like induction for suspected "big baby") that increase the risk for cesarean during labor.

The medical, financial, and personal burdens that result from infections and wound complications after cesarean are clear.

Stop placing fat women at increased risk of these burdensome complications by over-utilizing cesareans and inductions in this group.

OBJECTIVE:  To estimate the adequacy of antimicrobial activity of preoperative antibiotics at the time of cesarean delivery as a function of maternal obesity.

METHODS:  Twenty-nine patients scheduled for cesarean delivery were stratified according to body mass index (BMI) category, with 10 study participants classified as lean (BMI less than 30), 10 as obese (BMI 30-39.9), and nine as extremely obese (BMI 40 or higher). All patients were given a dose of 2 g cefazolin 30-60 minutes before skin incision. Antibiotic concentrations from adipose samples, collected after skin incision and before skin closure, along with myometrial and serum samples, were analyzed with microbiological agar diffusion assay.

Although all specimens demonstrated therapeutic cefazolin levels for gram-positive cocci (greater than 1 microgram/g), a considerable portion of obese and extremely obese did not achieve minimal inhibitory concentrations of greater than 4 micrograms/g for Gram-negative rods in adipose samples at skin incision (20% and 33.3%, respectively) or closure (20.0% and 44.4%, respectively).

No significant difference in cefazolin concentration was observed in mean closure adipose, myometrial, or serum specimens across the BMI categories.