Anesthesia and Wound Complications in Cesareans in "Morbidly Obese" Women 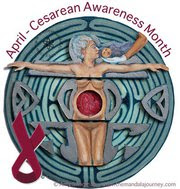 This month is Cesarean Awareness Month.  We are continuing our month-long focus on the overutilization of cesareans in the USA as a whole, and in particular in the subgroup of "obese" and "morbidly obese" women.

In the United States and many other countries, many care providers are unfortunately moving towards a policy that a planned "elective" cesarean is the delivery method of choice for "morbidly obese" women.  As we recently discussed, they assume that very fat women are unlikely to birth vaginally anyhow, that vaginal birth in very fat women is unsafe for the baby, that an emergent cesarean would take too long to save the baby, and that just doing a planned cesarean ahead of time as a matter of routine care will result in better outcomes among these women.

However,  as we pointed out, a recent study from the U.K. shows that in fact, routine planned cesareans do not improve outcomes at all (and there was a trend towards poorer outcomes in the planned cesarean group).  Furthermore, the study found that 70% of the women with "extreme obesity" (defined as BMI of 50 or more) were able to give birth vaginally when they were given the chance to.

In the first study (Vricella 2010), about 1 in 12 "morbidly obese" women who underwent a planned cesarean with regional anesthesia experienced a significant anesthesia complication.

No, the complications were not because they were trying to do a difficult epidural or spinal placement on an "obese" woman during labor.  These were planned cesareans.....not emergency cesareans, but cesareans planned ahead of time, with regional anesthesia.

And still, 1 in 12 had anesthesia complications.

In another study from around the same time (Alanis 2010), researchers looked at the complications associated with cesareans in women with "massive obesity" (BMI of 50 or more).

They found a much higher rate of wound complications than they expected.....30%, or about 1 in 3.

Now the reasons for this higher rate of wound complications are many (and there's another blog post on this coming soon), but even so, about 1 in 3 is a really high rate.

Their focus?  Changing the management that increases the risk for wound complications, such as subcutaneous wound drains and vertical incisions.  And these are very valid points....again something we'll be blogging about soon.....but the bottom line should have been making every effort to reduce the number of cesareans being done in this group at all.

Yet currently, many providers in the USA automatically schedule "morbidly obese" women for planned cesareans as a routine procedure, claiming it to be safer for the mother and baby, despite research showing that this is not true.

This practice has to change.

Most very fat women CAN give birth vaginally if just given an adequate chance to.  Automatically scheduling them for planned cesareans instead exposes the entire group to high rates of anesthesia complications, wound infections, blood clots, and hemorrhage, not to mention increased complications in future pregnancies.

It is indefensible to place an entire group so at risk like this, across the board.

It is time for doctors to recognize that they are causing MORE harm than good through the practice of routine planned cesareans in "morbidly obese" women.

*My snarky reply to their conclusion: So stop doing so many cesareans already!


OBJECTIVE: The objective of the study was to determine predictors of cesarean delivery morbidity associated with massive obesity. STUDY DESIGN: This was an institutional review board-approved retrospective study of massively obese women (body mass index, greater than/=50 kg/m(2)) undergoing cesarean delivery. Bivariable and multivariable analyses were used to assess the strength of association between wound complication and various predictors. RESULTS: Fifty-eight of 194 patients (30%) had a wound complication. Most (90%) were wound disruptions, and 86% were diagnosed after hospital discharge (median postoperative day, 8.5; interquartile range, 6-12). Subcutaneous drains and smoking, but not labor or ruptured membranes, were independently associated with wound complication after controlling for various confounders. Vertical abdominal incisions were associated with increased operative time, blood loss, and vertical hysterotomy. CONCLUSION: Women with a BMI 50 kg/m(2) or greater have a much greater risk for cesarean wound complications than previously reported. Avoidance of subcutaneous drains and increased use of transverse abdominal wall incisions should be considered in massively obese parturients to reduce operative morbidity.

*Illustration credit: Amy Swagman of The Mandala Journey.  Used with permission. Isn't it amazing?
Posted by Well-Rounded Mama at 2:07 AM

Sadly, I expect that the 'official' outcome of studies like these will be to recommend that obese women don't get pregnant *at all* rather than to advocate for vaginal births.

New Zealand doesn't have a stellar reputation for dealing with obesity/FA but readng your blog makes me feel very lucky I'm not in America - my birth experiences (as a super sized woman) would probably have been very different.

That is ridiculously frightening. I don't really care whether or not I have a birth via section or vaginally (and would like one more baby), but I do care about increased risks of complications. Other than avoiding a c-section, anything one can do to minimize risks?

Boy, can I identify with this information. I had a vertical incision for my second C-section and the wound took almost exactly 6 months to heal. What a nightmare it was. I have so few good memories of my son's newborn stages because all of my focus was on healing this gaping wound in my belly...

This is yet again an example of underwhelming news foisted upon the public. Fat people in general (likemyself @ 305 lbs) have pooer post-operative outcomes in terms of morbidity. This is a proven fact. So why in the world would a cesarean be a nagical surgery with fewer complications?!?!?!
To pull a reference from my ob said what, perhaps the OB's advocating these c-sections are coutning on the magical unicorns to protect their obese patients post-op?
I just came across this today http://starglobaltribune.com/2011/effect-of-obesity-obese-patients-found-at-a-higher-risk-from-major-surgery-complications-8197
Is it just me or is this also underwhekming news if you operate on unhealthy fat people they have more complications. ummmmm isn't that true for any size?
If you have surgery of any type and are unhealthy you will have more complications.
ps i love your blog!

I am SO grateful that I did not have any complications with the cesarean I had for my firstborn. I recalled a mom who was obese and had had a cesarean. She had a vertical (at least on the outside, not sure about inside) cut because the doctor felt that she would have trouble healing due to the stomach overhanging as far as keeping it dry and stuff. Her cesarean was planned due to a breech presentation if I recall correctly. I did read that a lower transverse cut was better for VBAC chances so I did ask to make sure that I was cut in a way that would allow me a chance at a VBAC. It did mean my cut was at the bikini line. I couldn't look at it at all but I did get gauze and I did make sure to take care of it and keep it dry and therefore, fared well as far as healing. I am more prone to yeast infections in that area and it hurt inside for awhile a little but having heard some horror stories, I can't complain (which makes it harder to justify to a doctor why I shouldn't have just had another one; it was the EMOTIONAL healing that took MUCH longer). My scar is light and is barely noticeable and I'm grateful for that. My younger sister who is a good 100 lbs or so less than I am did not fare so well after her cesarean. She ended up with part of it reopening and other issues and her scar doesn't look as healed and her baby is now 2.

That said, one of the big reasons I made sure to get out of South Korea was that I did not want to put myself in the hands of someone potentially operating on me who had absolutely NO experience operating on an obese woman, ESPECIALLY since it was VERY possible that I would be put under due to the lack of large enough epidural needles over there. I felt that even if I ended up with a cesarean here in the US, my chances were better than if I had a cesarean over there though I definitely wanted to avoid one altogether. I honest to goodness felt that if I stayed there and ended up with a cesarean, I would not survive. It may have been an irrational fear but it was one I could not get rid of.