This blog has an ongoing series on Polycystic Ovarian Syndrome (PCOS). Because so much information has been gathered about it, I am putting up this Quick Guide to the PCOS Series so the information is more searchable and easier to use. Keep checking back periodically. More posts will be added as they are finished.

This PCOS series is unique on the internet because it is weight-neutral.

There are many other sites with information on PCOS, but most emphasize weight loss or strict dietary restrictions as cornerstones of treatment. (More on that below.) This series does not push weight loss or a particular diet as a treatment, but rather discusses approaches that are not weight-centric. Weight loss as an approach is mentioned on occasion because doctors recommend it so often, but it is not promoted, and its pros and cons are critically examined. No one is shamed because they do or do not choose weight loss as a treatment.

I encourage you to review many different sites on PCOS and to think critically about the information you find from them. Ultimately your treatment choices are up to you.

In this PCOS series so far you will find an introduction to PCOS as a health concern:
Many people with PCOS have high levels of insulin, so one of the mainstays of treatment is to lower insulin levels. You will find a mini-series on insulin-sensitizing medications here, including:

Other hallmarks of PCOS include high levels of androgens (male hormones) and irregular periods. Therefore I also have information on medications for these things, including:
In addition, there are articles that discuss specific conditions associated with PCOS and the treatments available for them. This includes:
One of the least-discussed conditions associated with PCOS is Alopecia Androgenetica (AGA, also called female-pattern hair loss or FPHL). I did a 3-part mini-series on it:
The blog also has an occasional post reviewing recent research studies on PCOS, like one on inositols for ovulation, inositols in general, or inositols for preventing gestational diabetes. Sometimes I publish an opinion piece/rant about weight bias and fertility treatment discrimination and how it impacts people with PCOS.

As more posts are added to the series, this list will be updated. Please feel free to share a link to this series on your social media platforms or on PCOS forums. As always, you may read this information for free. However, if you quote an article or use its information elsewhere, you must give credit to me and link back to the original article. I do not give permission for these articles to be reposted elsewhere. Just give a brief comment and link back to the original article with proper citation. 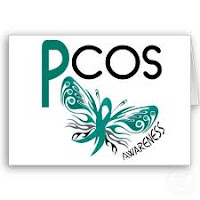 Polycystic Ovarian Syndrome (PCOS) affects many higher weight women, but sadly many don't know they have it. Among those who do know about PCOS, there are many gaps in knowledge. Even among medical professionals who treat people with PCOS, there is a great deal of misinformation and mismanagement due to ignorance and weight stigma. There is a pressing need for good, research-based information about treating PCOS.

There are now many resources online about PCOS but unfortunately, not all of them are very evidence-based. Some do quote research but only selectively, without giving a full picture of the pros and cons of a particular treatment. Others promote all kinds of alternative treatments as if they are proven, but with only anecdotal evidence to support it.

This PCOS series is designed to take an evidence-based look at PCOS and its various treatments, both traditional and alternative. Links to research are placed in each blog post, and the most important studies are summarized at the bottom of most posts. Anecdotal stories are not immaterial so they are considered too, but they are not seen as proof.

Financial conflicts of interest contaminate many PCOS resources. Remember that the weight loss and diet business is highly lucrative, and many scientific researchers and doctors are biased by grants and ties to obesity treatment programs and drug companies. They are often not even aware of their own biases and conflicts of interest. Even consumer-run PCOS resources often promote and make money off a particular dietary approach, supplement, or personal health coaching business. Therefore, when researching PCOS, look for conflicts of interest and question conclusions.

Every source of information is subject to bias, even when no financial incentive exists. Be aware of the bias of the sites you read. That includes this resource. Its weight-neutral approach makes it unique among PCOS resources, but some would charge it might be biased against weight loss. On the other hand, unlike many PCOS resources, this series has no financial incentive towards any particular treatment. I make no money from the blog and do not benefit from people choosing non-weight loss treatments. I consider evidence for weight loss and try to be as fair as I can in its evaluation, but I won't pull punches about when it doesn't measure up. It's up to you to decide if I'm writing about it fairly and what the right course is for yourself.

If you are new to this site, I strongly suggest reading the Terminology Page and the Health At Every Size® information to understand the language and philosophy of a weight-neutral approach.

As noted, most PCOS websites have a tremendous weight-loss emphasis. Some are run by people who are selling "lifestyle coaching" or various supplements for PCOS and are profiting from their PCOS connections. In essence, they have monetized their diagnosis. There is nothing necessarily wrong with this, but it does inherently bias the information they have available and the treatments they promote.

The strong weight loss emphasis on many sites also alienates people who have moved beyond dieting and embrace a size acceptance point of view. People like this often avoid typical PCOS sites because of the weight emphasis and so miss important information about treating the condition. There is a strong need for good, in-depth information without pushing weight loss as the cornerstone of all treatment, something that is very missing in most PCOS resources.

Of course, the weight-centric paradigm is very strong in PCOS circles, both among consumers and medical professionals. Even the mere suggestion that dieting could be counter-productive is heresy to some. The idea of a PCOS resource that does not promote weight loss will immediately discredit this series in some eyes.

But remember, you are your own boss. No one is telling you what to do. It doesn't hurt you to consider an weight-neutral point of view. If you decide it's nonsense, you can certainly pursue weight loss as a treatment for your PCOS. No one is going to stop you. Certainly, there is some research that weight loss can be helpful for some things in PCOS, though I would point out it's usually temporary. If you want to pursue that, go ahead. There are plenty of PCOS resources friendly to that approach and no shortage of weight loss advice online.

The problem is that PCOS and weight loss research, like most research on weight loss, is short in duration (usually less than 24 months), has very poor long-term success, and completely ignores the risks that can be associated with weight loss/weight cycling. Does a 5-10% (or larger) weight loss really benefit your health if you end up heavier afterwards and with more eating-disordered behaviors? Or if you end up with gallstones, kidney cancer, or endometrial cancer from weight cycling?

Given the overwhelming evidence of poor long-term success with weight loss and the significant harms that can come from yo-yo dieting, it's important to know that there is an alternative. You can treat your PCOS without having to go on yet another diet that is likely to fail. That doesn't mean that lifestyle is irrelevant to treating PCOS, but simply that an emphasis on weight loss is not required. This blog examines lifestyle as an intervention for PCOS, but without an emphasis on guilt or pressure for any particular approach. Nor do we measure success by the scale.

This series does not ignore the possibility of weight loss as treatment, but promoting weight loss is not its focus, unlike most other PCOS resources. The decision on whether or not to lose weight is left up to the individual.

As with any medical situation, readers will have to carefully consider the pros and cons of all their choices and decide what is right for themselves. That might involve intentional weight loss, but it might mean choosing a Health At Every Size® paradigm instead, which emphasizes healthy habits guided by lab results and symptoms instead of the scale. Whatever you decide on the weight loss question for you is fine; just make that decision from an informed place.

Please remember that this blog is meant to be a safe space. If you decide on weight loss, that's fine, but respect other people's right to have a diet-free space. Do not promote diets, weight loss surgery, eating-disordered behaviors, or body-shaming on this site, and treat everyone politely. You are allowed to disagree with my point of view if it's done respectfully. I can and do restrict comments when necessary. No fat hate is allowed.

This series exists because it's important that people know that there are evidence-based treatment approaches that can help mitigate the risks of PCOS without adding in the risks and emotional roller-coaster of weight loss. The decision about how to approach your weight, however, is entirely up to you.

Remember, you can have a good life, even with health challenges like PCOS. But it pays to be proactive and learn as much as you can about the condition and your treatment choices.

Posted by Well-Rounded Mama at 1:21 AM

Email ThisBlogThis!Share to TwitterShare to FacebookShare to Pinterest
Labels: Health At Every Size, PCOS, PCOS Series