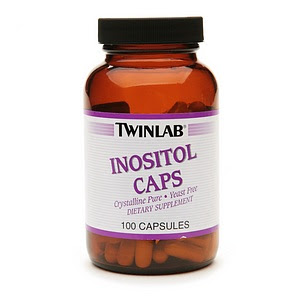 It's September, and that means it's time for PCOS Awareness Month. We have a continuing series on Polycystic Ovarian Syndrome (PCOS) that looks at various PCOS issues from a weight-neutral point of view.

One of the most exciting treatments on the horizon for Polycystic Ovarian Syndrome (PCOS) is inositol, either myo-inositol or d-chiro-inositol, or a combination of both. We've discussed it before, but now there is a recent meta-analysis of the literature.

New Review of Inositol for Fertility

Here is a review of the best research we have so far on inositol for fertility issues in women with PCOS. There are other studies, but these studies met high enough standards for quality to be considered for this analysis.

The good news is that the results so far are quite encouraging. The bad news is that it's clear we still need better-designed trials.

Let's start with the bad news. There was little uniformity in the protocols. Some studies used myo-inositol, some studies used d-chiro-inositol. Some studies compared inositols with metformin, others did not. Trials are also fairly small, which makes it harder to know how reliable the data is. Most importantly, no trials reported on live birth rates, which is the most important outcome.

The good news is that overall, the review was quite positive. The review's authors found that use of inositol improved ovulation rates and regularity of menstrual cycles.

The review found that inositol was better than placebo (sugar pill), and was also more effective than metformin. In one study, it also increased pregnancy rates (3.3x compared to placebo, 1.5x compared to metformin), but we don't know how many of these ended up as live births. The authors concluded:


Inositol appears to regulate menstrual cycles, improve ovulation and induce metabolic changes in polycystic ovary syndrome; however, evidence is lacking for pregnancy, miscarriage or live birth. A further, well-designed multicentre trial to address this issue to provide robust evidence of benefit is warranted.

So there are reasons to be cautiously optimistic about inositols, but a lot more research is needed. Come on, researchers, get this work going! Inositol's preliminary results look very promising so far, but we need much more data before it becomes standard of care. In particular, we need to know whether it improves the live birth rate in people with PCOS, which is the ultimate measure of successful treatment.

Still, it's another tool in the toolbox that can be considered for women with PCOS who don't ovulate regularly. And on the whole, that's good news.


...Systematic review and meta-analysis of randomised controlled trials (RCT) that evaluated the effects of inositol as an ovulation induction agent... We included ten randomised trials. A total of 362 women were on inositol (257 on myo-inositol; 105 on di-chiro-inositol), 179 were on placebo and 60 were on metformin. Inositol was associated with significantly improved ovulation rate (RR 2.3; 95% CI 1.1-4.7; I2 = 75%) and increased frequency of menstrual cycles (RR 6.8; 95% CI 2.8-16.6; I2 = 0%) compared with placebo. One study reported on clinical pregnancy rate with inositol compared with placebo (RR 3.3; 95% CI 0.4-27.1), and one study compared with metformin (RR 1.5; 95% CI 0.7-3.1). No studies evaluated live birth and miscarriage rates. Inositol appears to regulate menstrual cycles, improve ovulation and induce metabolic changes in polycystic ovary syndrome; however, evidence is lacking for pregnancy, miscarriage or live birth. A further, well-designed multicentre trial to address this issue to provide robust evidence of benefit is warranted.

Posted by Well-Rounded Mama at 1:38 PM