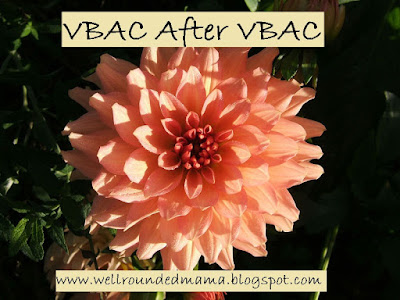 A large new study on VBAC after prior VBAC has just come out, and it affirms what we've seen before, that risk for subsequent labors goes down and success rates go up after a previous VBAC.

This is a large retrospective cohort study from Israel. It looked back at all women who attempted a VBAC at a major hospital over a period of 7 years (2007-2014).

The study group (n=1,211) contained the women with at least one prior VBAC. The control group (n=2,045) was comprised of women pursuing their first VBAC.

As we've seen before, a prior VBAC increases the chances of another VBAC. So it was in this study, too. Those with a prior VBAC had a 96% subsequent VBAC rate. (I think that's the highest VBAC rate of any study I've ever seen!)

However, even the women pursuing their first VBAC had a high rate, nearly 85%. This suggests that the Israelis are doing something right when it comes to attending VBACs, because their VBAC rates are much better than those of many U.S. hospitals.

Induction of labor was associated with reduced VBAC rates, cutting the VBAC odds by half, but induction rates were fairly low compared to some practices. This allowed the success rate to stay high overall.

The take-home from this study is that when other variables were controlled for, having a prior VBAC cut the odds for uterine rupture in half in subsequent labors.

It's also important to point out that the risk for rupture wasn't zero. Even after a VBAC, uterine rupture is still a potential risk and has been known to occur. Neither is prior VBAC a guarantee of subsequent VBAC outcomes; there's always a chance of another cesarean because unpredictable things happen in labor.

But it's good to confirm again that the risk for uterine rupture is substantially lower once you've had a VBAC, and that your chances of having another VBAC are very good indeed.

Other VBAC after VBAC Studies

This is not the first study on successive multiple VBACs. Prior research also shows improved outcomes with previous VBAC. For example, Shimonivitz (2000) found the risk for uterine rupture "decreased dramatically" once a woman has had a VBAC.

Some women have reported being told that risk for uterine rupture goes back up again after a certain number of VBACs and that therefore only a few VBACs can be allowed before a woman is required to have repeat cesareans again. This claim is not based in research at all and flies in the face of common sense.

The most definitive study on this claim is Mercer (2008), who studied multiple successive VBACs in 19 hospitals in the MFMU network. They found that UR rates dropped after the first VBAC and remained low thereafter:

The other consideration is that if a woman is not "allowed" to VBAC, she ends up with multiple repeat cesareans, which carry significant risks of complications such as placenta previa, placenta accreta, bladder and bowel injuries, hemorrhage, and hysterectomy (Silver 2006). The risk is dose-dependent, meaning that the risk increases with every successive cesarean a woman has. If a woman is planning a large family, the evidence clearly shows that repeated VBACs are far safer than repeated cesareans.


Women with prior successful VBAC attempts are at low risk for maternal and neonatal complications during subsequent VBAC attempts. An increasing number of prior VBACs is associated with a greater probability of VBAC success, as well as a lower risk of uterine rupture and perinatal complications in the current pregnancy. There is no reason to place a limit on the number of VBACs a woman can have.

Once you've had a VBAC, you have an even better chance than before at another VBAC. It's not a guarantee, of course, but most studies show the VBAC after VBAC rate to be above 90%.

The uterine rupture rate after prior VBAC seems to fall between 0.4% and 0.7%. However, it will vary depending on how much induction is used, what induction methods are used, how aggressive providers are with augmentation, and any other other risk factors present. Whatever the exact number is, studies show that the uterine rupture rate decreases strongly after a prior VBAC but there should always be an awareness of the possibility.

Similar Studies on VBAC After VBAC


OBJECTIVE: To estimate the success rates and risks of an attempted vaginal birth after cesarean delivery (VBAC) according to the number of prior successful VBACs. METHODS: From a prospective multicenter registry collected at 19 clinical centers from 1999 to 2002, we selected women with one or more prior low transverse cesarean deliveries who attempted a VBAC in the current pregnancy. Outcomes were compared according to the number of prior VBAC attempts subsequent to the last cesarean delivery. RESULTS: Among 13,532 women meeting eligibility criteria, VBAC success increased with increasing number of prior VBACs: 63.3%, 87.6%, 90.9%, 90.6%, and 91.6% for those with 0, 1, 2, 3, and 4 or more prior VBACs, respectively (P<.001). The rate of uterine rupture decreased after the first successful VBAC and did not increase thereafter: 0.87%, 0.45%, 0.38%, 0.54%, 0.52% (P=.03). The risk of uterine dehiscence and other peripartum complications also declined statistically after the first successful VBAC. No increase in neonatal morbidities was seen with increasing VBAC number thereafter. CONCLUSION: Women with prior successful VBAC attempts are at low risk for maternal and neonatal complications during subsequent VBAC attempts. An increasing number of prior VBACs is associated with a greater probability of VBAC success, as well as a lower risk of uterine rupture and perinatal complications in the current pregnancy.


...Although a vaginal birth after a cesarean is considered safe in modern obstetrics, it is not known whether repeated VBACs increase the risk of rupture, or whether the first VBAC proves the strength and durability of the scar, predicting further successful and less risky vaginal deliveries. OBJECTIVES: To evaluate the effect of repeated vaginal deliveries on the risk of uterine rupture in women who have previously delivered by cesarean section. METHODS: In this retrospective study, 26 VBAC deliveries complicated by uterine rupture were matched for age, parity, and gravidity with 66 controls who achieved VBAC without rupture... We found that the risk of rupture decreases dramatically in subsequent VBACs. Of the 40 cases of uterine rupture recorded during the 18 year study period, 26 occurred during VBAC deliveries. Of these, 21 were complicated first VBACs. We also found that the use of prostaglandin-estradiol, instrumental deliveries, and oxytocin had been used significantly more often during deliveries complicated with rupture than in VBAC controls. CONCLUSIONS: Once a woman has achieved VBAC the risk of rupture falls dramatically. The use of oxytocin, PGE2 and instrumental deliveries are additional risk factors for rupture, therefore caution should be exerted regarding their application in the presence of a uterine scar, particularly in the first vaginal birth after cesarean.