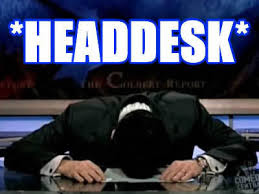 Just in time for Cesarean Awareness Month, another *headdesk* moment from My OB Said What?!?.

This one is about whether a woman who has already had VBACs should continue to have more VBACs or whether she needs to sign up for more cesareans because having too many VBACs becomes "too dangerous."


"I will not go over this with you and you are being argumentative! More than a few VBACs will be unsafe because the scar stretches and can become unstable. I don't care how many safe VBACs you've had and about any of the other testing you've had in the past, this is dangerous!" --OB to mother trying to VBAC again

Sometimes I can't believe the stupid things that come out of some providers' mouths. With all the research out there disproving the foolish myths that circulate, I can't believe that this is even a question, yet every once in a while we still hear this one in VBAC groups. Sigh.

So let's go over what the research actually says:
Of course, in the interest of accuracy, I would point out that once you've had a cesarean, the risk of uterine rupture is never zero or negligible, even with multiple prior VBACs.  However, the risk is decreased compared to a woman who has never had a VBAC.  And the risk of multiple repeat cesareans is certainly significant.

Given that the risk for rupture goes down somewhat with successive VBACs, given that women with a prior VBAC have a very high success rate in subsequent VBAC attempts, given that grand multiparity is not a contraindication to VBACs, and given that there are strong risks with multiple repeat cesareans, why would doctors limit how many VBACs a woman is "allowed" to have?

Mercer and colleagues stated as much in the conclusion of their study, saying (emphasis mine):


Women with prior successful VBAC attempts are at low risk for maternal and neonatal complications during subsequent VBAC attempts. An increasing number of prior VBACs is associated with a greater probability of VBAC success, as well as a lower risk of uterine rupture and perinatal complications in the current pregnancy. There is no reason to place a limit on the number of VBACs a woman can have.

That research was published in 2008.  It's long past time for the entire obstetric community to get the memo on this.

OBJECTIVE: To estimate the success rates and risks of an attempted vaginal birth after cesarean delivery (VBAC) according to the number of prior successful VBACs. METHODS: From a prospective multicenter registry collected at 19 clinical centers from 1999 to 2002, we selected women with one or more prior low transverse cesarean deliveries who attempted a VBAC in the current pregnancy. Outcomes were compared according to the number of prior VBAC attempts subsequent to the last cesarean delivery. RESULTS:  Among 13,532 women meeting eligibility criteria, VBAC success increased with increasing number of prior VBACs: 63.3%, 87.6%, 90.9%, 90.6%, and 91.6% for those with 0, 1, 2, 3, and 4 or more prior VBACs, respectively (P<.001). The rate of uterine rupture decreased after the first successful VBAC and did not increase thereafter: 0.87%, 0.45%, 0.38%, 0.54%, 0.52%(P=.03). The risk of uterine dehiscence and other peripartum complications also declined statistically after the first successful VBAC. No increase in neonatal morbidities was seen with increasing VBAC number thereafter. CONCLUSION: Women with prior successful VBAC attempts are at low risk for maternal and neonatal complications during subsequent VBAC attempts. An increasing number of prior VBACs is associated with a greater probability of VBAC success, as well as a lower risk of uterine rupture and perinatal complications in the current pregnancy.

PURPOSE: To determine the risk of uterine rupture for women undergoing trial of labour (TOL) with both a prior caesarean section (CS) and a vaginal delivery. METHODS: A systematic literature search was performed using keywords for CS and uterine rupture. The results were critically appraised and the data from relevant and valid articles were extracted. Odds ratios were calculated and a pooled estimate was determined using the Mantel-Haenszel method. RESULTS: Five studies were used for final analysis. Three studies showed a significant risk reduction for women with both a previous CS and a prior vaginal delivery (PVD) compared to women with a previous CS only, and two studies showed a trend towards risk reduction. The absolute risk of uterine rupture with a prior vaginal delivery varied from 0.17 to 0.46%. The overall odds ratio for PVD was 0.39 (95% CI 0.29-0.52, P < 0.00001). CONCLUSION: Women with a history of both a CS and vaginal delivery are at decreased risk of uterine rupture when undergoing TOL compared with women who have only had a CS.

BACKGROUND: Uterine rupture is a catastrophic obstetric complication, most often associated with a preexisting cesarean section scar. Although a vaginal birth after a cesarean is considered safe in modern obstetrics, it is not known whether repeated VBACs increase the risk of rupture, or whether the first VBAC proves the strength and durability of the scar, predicting further successful and less risky vaginal deliveries. OBJECTIVES: To evaluate the effect of repeated vaginal deliveries on the risk of uterine rupture in women who have previously delivered by cesarean section. METHODS: In this retrospective study, 26 VBAC deliveries complicated by uterine rupture were matched for age, parity, and gravidity with 66 controls who achieved VBAC without rupture. The histories, demography, pregnancy, labor and delivery records, as well as neonatal outcome were compared. RESULTS: We found that the risk of rupture decreases dramatically in subsequent VBACs. Of the 40 cases of uterine rupture recorded during the 18 year study period, 26 occurred during VBAC deliveries. Of these, 21 were complicated first VBACs. We also found that the use of prostaglandin-estradiol, instrumental deliveries, and oxytocin had been used significantly more often during deliveries complicated with rupture than in VBAC controls. CONCLUSIONS: Once a woman has achieved VBAC the risk of rupture falls dramatically. The use of oxytocin, PGE2 and instrumental deliveries are additional risk factors for rupture, therefore caution should be exerted regarding their application in the presence of a uterine scar, particularly in the first vaginal birth after cesarean.

BACKGROUND: The rate of vaginal birth after a cesarean (VBAC) delivery in the multiparous population has decreased largely in recent years because of maternal and neonatal complications. The clinical management of grand multiparous (GMP) women (>5 births) with a prior cesarean delivery is even less clear. The purpose of the present study was to assess the risks of maternal and neonatal complications associated with VBAC compared to that of repeated elective cesarean section (CS) in the GMP population. METHODS: A retrospective study of 1,102 GMP women with a singleton gestation and a prior single CS was conducted. Data were retrieved from the database of the Department of Obstetrics and Gynecology at the Soroka University Medical Center, Beer Sheva, Israel. Maternal and neonatal outcomes were compared between women who underwent a successful VBAC attempt, women who had failed in a trial of labor and women who had an elective repeated CS. RESULTS: Six hundred and nineteen women (56%) underwent a successful VBAC, 155 (14%) underwent a trail of labor and 328 (30%) had an elective repeated CS. Women who had a successful VBAC required less blood transfusion, and had less puerperal fever diseases (P < 0.001). Induction or augmentation of labor was associated with failure of VBAC (P < 0.001). No significant differences in neonatal complications were observed between the groups. No significant difference in uterine dehiscence, uterine rupture, amnionitis, postpartum hemorrhage, hysterectomy, puerperal fever and thromboembolic diseases was observed between the groups. CONCLUSIONS: A successful VBAC in the GMP population was not associated with a higher risk of maternal complications in comparison with a repeated elective CS.

Unbelievable. Sigh... Thanks for being the voice of sanity, Kmom!! <3