PCOS and Endometrial Cancer Risk: The Dilemma of Weight Loss and Weight Cycling 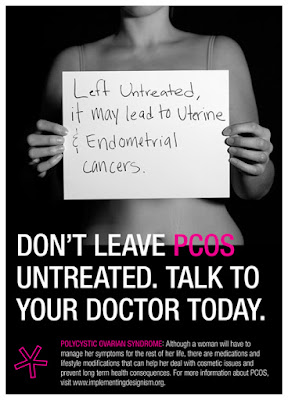 September is Polycystic Ovarian Syndrome (PCOS) Awareness Month. As part of our ongoing series on PCOS, today we are going to talk about endometrial cancer.

PCOS is a hormonal disorder usually characterized by very strong insulin resistance. This insulin resistance causes many problems in the body, including irregular menstrual cycles, strong susceptibility towards weight gain, unwanted hair growth on the face and body (hirsutism), hair loss on the head (alopecia), cystic acne, body tags, a strong tendency towards diabetes, infertility, and many other symptoms.

Among other risks, PCOS is associated with a high risk for endometrial cancer (cancer in the lining of the uterus). Because PCOS tends to cause an irregular menstrual cycle, a woman's uterine lining may not get sloughed off each month. Some women with PCOS have extra long cycles (35 or more days), while others go months or even years without a menstrual cycle. This causes the lining of the uterus (the endometrium) to build up excessively; in time, atypical cells may develop. This is called endometrial hyperplasia, or overgrowth of the uterine lining. This hyperplasia can eventually turn into endometrial cancer.

This is why it is so important that women with PCOS get treatment. They need to have regular periods so that this overgrowth does not occur. There are many options for this, including progesterone treatments; birth control pills; insulin sensitizers like metformin, TZDs, or inositols; and androgen blockers.

However, most doctors' first recommendation is weight loss.

The majority of women with PCOS have an "overweight" or "obese" BMI. Because of the very significant insulin resistance with PCOS, these women have a strong tendency towards weight gain over time.

Women of size with PCOS face a difficult dilemma in how they approach their weight. Care providers push them to lose weight, often telling them weight loss can "cure" PCOS or get rid of most of their symptoms. Weight loss is considered by many to be the first line of therapy for PCOS.

It's true that some short-term research does seem to suggest benefits from weight loss for women with PCOS, especially in shocking the system into ovulation. But this research is almost always based on fairly short follow-ups because most weight comes back within a few years after a significant weight loss. The very loss that leads to short-term benefits may backfire later into weight gain and worsened insulin resistance.

The critical question is whether women are better off in the long term trying to lose weight, or whether the high potential for weight cycling overcomes the possible benefit of weight loss. In particular, we need to know how weight loss and weight cycling affects the chances of getting endometrial cancer.

Here are two studies that demonstrate this weight loss dilemma. One study (Luo 2017) looked at intentional weight loss in "obese" women and how that affected their risk for endometrial cancer. (The study did not look specifically at women with PCOS but weight and PCOS are so tightly tied together that weight is a pretty fair proxy for presumed PCOS when discussing endometrial cancer.)

Weight fluctuations up and down the scale may also have its own independent effect. The second study (Welti 2017) found that weight cycling 4-6 times was associated with an increase in risk for endometrial cancer. Many women of size cycle far more times than that; how increased is their risk?

High BMI women with PCOS face a difficult dilemma when deciding what to do to lessen their risk for endometrial cancer.

In other words, high BMI women with PCOS are faced with a game of Russian Roulette when it comes to weight loss and endometrial cancer.

There are no easy answers here. Each individual woman gets to make her own choices about weight loss as a treatment for PCOS, taking into account her own personal weight history and habits.

Care providers need to recognize that their constant pressure on patients to lose weight may actually backfire and create more risk rather than less. They need to recognize the right of the patient to choose whether or not to pursue weight loss, that it is possible to emphasize healthy lifestyle without tying that to weight loss, and to acknowledge the need for multiple tools beyond weight loss to address the unique needs of their PCOS patients.

Posted by Well-Rounded Mama at 3:35 AM