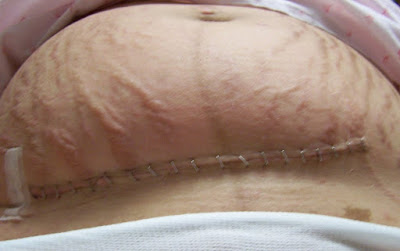 Here is yet another study (Ellekjear 2017) showing that labor is often managed differently in "obese" women, with a lower surgical threshold being the most marked finding. The authors concluded:

Research generally shows women of size probably need more time in labor in general, especially in the early stages, but once their labors get going, they usually go well. However, many care providers opt to terminate labor earlier and move quickly to a cesarean. They are understandably concerned about the risks of doing an emergent cesarean on a larger body, but they are usually giving up far too soon and causing an epidemic of "failure to wait" cesareans in women of size. .

There was an infamous Vaginal Birth After Cesarean (VBAC) and obesity study in 2001 that demonstrated this quite strongly. 30 women over 300 lbs. were "allowed" to labor for a VBAC, but only 13% of those who tried for a VBAC ended up with one. As a result, this was widely publicized as a reason not to "let" high-BMI women try for a VBAC and cited by doctors as a reason to deny fat women the opportunity to VBAC.

However, what the full text of the study actually reveals is that the majority of these women were induced, which is known to increase the chances of cesarean and lower the chances of VBAC. Interestingly, the only women who got a VBAC in this study were the ones who were not induced.

High induction rates and a lack of patience in labor are the main factors that drive the high cesarean rate in obese women.

Studies have shown that about half of high BMI women in general are induced, typically increasing cesarean rates. However, when allowed to go into spontaneous labor, cesarean rates are more equalized among BMI groups.

One earlier study found that high BMI women tended to take longer to progress in labor, especially between 4 and 7 cm of dilation. They urged far more patience in the labors of heavier patients.

Similarly, a 2016 study found that 57% of labors in high BMI first-time mothers were stopped before 6 cm of dilation; those mothers ended with cesareans. Failure to Wait is a major problem when doctors attend women of size.

More spontaneous labor and more time during labor would probably have yielded far better VBAC rates in that 2001 VBAC study. It should be pointed out that a look at some later studies showed VBAC rates around 50-70% in obese women, which could almost certainly be increased even more since they also reflect very high induction rates and the old active labor definition. Indeed, research from England shows that the majority of even very high BMI women can have a vaginal birth with different management.

The bottom line is that multiple studies have found that the labors of high BMI women are managed differently than the labors of average-sized women.

In particular, too many inductions are being done, the surgical threshold is very low, and more patience is needed during labor. This represents an area that is ripe for change and offers hope for lowering the far-too-high cesarean rate in obese women.

As the authors of a Canadian study concluded about the management of high BMI women:


Because of the potential morbidities associated with Caesarean section, we must modify our management approaches to allow equal opportunity for a vaginal birth for all women.


...METHODS: Retrospective observational cohort study of 1885 nulliparous women with a single cephalic presentation from 37 0/7 to 42 6/7 weeks of completed gestation and spontaneous or induced labour at Nordsjællands Hospital, University of Copenhagen, Denmark, in 2011 and 2012. Total duration of labour and the first and second stages of labour were compared between early-pregnancy normal-weight (BMI <25 kg/m2), overweight (BMI 25-29.9 kg/m2), and obese (BMI ≥30 kg/m2) women. Proportional hazards and multiple logistic regression models were applied. RESULTS: Early pregnancy BMI classified 1246 (66.1%) women as normal weight, 350 (18.6%) as overweight and 203 (10.8%) as obese. No difference in the duration of total or first stage of active labour was found for overweight (adjusted HR = 1.01, 95% CI 0.88-1.16) or obese (adjusted HR = 1.07, 95% CI 0.90-1.28) compared to normal weight women. Median active labour duration was 5.83 h for normal weight, 6.08 h for overweight and 5.90 h for obese women. The risk of caesarean delivery increased significantly for overweight and obese compared to normal weight women (odds ratios (OR) 1.62; 95%CI 1.18-2.22 and 1.76; 95%CI 1.20-2.58, respectively). Caesarean deliveries were performed earlier in labour in obese than normal-weight women (HR = 1.80, 95%CI 1.28-2.54). CONCLUSION: BMI had no significant effect on total duration of active labour. Risk of caesarean delivery increased with increasing BMI. Caesarean deliveries are undertaken earlier in obese women compared to normal weight women following the onset of active labour, shortening the total duration of active labour.

Posted by Well-Rounded Mama at 5:13 PM