Once Again, Metformin Does Not Reduce Birthweight 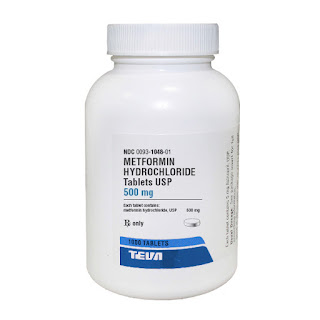 One of the risks of "obesity" and pregnancy that care providers get most concerned about is big babies.

Although most high-BMI women have average-sized babies, they do have an increased rate of big babies on average and this tends to panic many providers.

Why all the concern? Most of the time, big babies have normal outcomes, but research is clear that they are more at risk for shoulder dystocia (shoulders getting stuck), as well as low blood sugar at birth and perhaps also cesarean section.

Because doctors frequently get sued for nerve damage caused by shoulder dystocia, they understandably are concerned when they suspect a woman might have a large baby. And because larger women tend to have larger babies on average, many care providers want to intervene in the pregnancies of women of size to try and prevent big babies.

Prophylactic metformin is just the latest intervention that care providers are using to try and reduce fetal size among high-BMI women.

Traditionally, the most common intervention if a big baby is suspected is a planned cesarean or an induction "before the baby gets too big," even though most research does not support improved outcomes from either of these interventions. Indeed, there is substantial research to suggest poorer outcomes. Thus care providers have looked for other alternatives to reduce birthweight in the infants of high-BMI women.

The most popular intervention these days is to strictly limit the mother's prenatal weight gain. A high weight gain has been shown to be associated with more Large-for-Gestational-Age (LGA) babies, so it does make sense for women to be careful about what they eat and try to avoid large gains.

Many care providers try to reduce the number of large babies by pressuring women to lose weight before pregnancy. However, research clearly shows that few people lose weight long-term, and that even when weight is lost long-term, it is usually only a very small percentage of their weight. Rarely does a woman completely normalize her weight before pregnancy and keep it off successfully. So this tactic also has limited use, leading care providers to look for other possibilities.

The most recent trendy "fix" for big babies has been to put high-BMI women, even those with normal glucose tolerance, on metformin (Glucophage). The theory is that many high-BMI women have blood sugar or insulin levels that are elevated but not high enough to be diagnosed with gestational diabetes. These "pre-diabetic" blood sugar levels and/or high insulin levels are thought to be what is causing the baby to grow larger.

As we have written about before, this is an interesting theory but one that is fraught with concerns. Most women of size don't have big babies; if you put them all on metformin as a preventative, what does this do to the majority who would have normal-sized babies? And does metformin use increase risks for other problems? For example, one meta-analysis shows an increased tendency towards pre-term birth with metformin. And we know that metformin tends to deplete B vitamin levels, especially B12 and folic acid. Could that cause birth defects or cause other problems? These are important questions that need to be answered.

In the meantime, the question of whether metformin "normalizes" fetal birth weights is being answered now. It does not.

One study from England recently found that giving metformin to obese women with normal glucose tolerance did NOT reduce fetal size.

This new study seems to confirm those findings. Using metformin in women with a BMI over 35 but normal glucose tolerance did not reduce fetal size.

Those who promote scorched-earth intervention policies in the pregnancies of women of size will point out that the metformin use did lower the mother's weight gain. However, the difference was small; only about 5 lbs. or so. Is that really clinically meaningful, especially when it didn't change the baby's birthweight or much of anything else?

The one promising find was that metformin use did lower the rate of pre-eclampsia, from 11% to 3%. Since pre-eclampsia is a very serious complication, that is an interesting finding, and one that echoes a few other studies on metformin use.

However, this is balanced by the fact that most other studies have shown that metformin had little effect on pre-eclampsia rates. Indeed, there have been at least two studies that have found an increased rate of pre-eclampsia when metformin was used. So the question of its efficacy for reducing pre-eclampsia is still up in the air.

Nor did metformin use change the rate of gestational diabetes (GD) in this study, which you might expect it to have done. That casts even more doubt on its utility in non-diabetic obese women.

Another downside is that many women experienced side effects (usually G.I. issues like nausea, vomiting, and diarrhea) while taking metformin. Fifty women dropped out of the trial, presumably because of side effects like these. If taking metformin results in G.I. misery, women are simply not going to take it, so it doesn't really matter how effective it could be (or not). It has to be tolerable for those taking it.

I think metformin is a pretty amazing drug in many ways. It has an excellent safety profile, and an impressive record of improving health outcomes in people with diabetes. It does cause significant G.I. issues in some people so its utility is limited for those folks, but for those who can tolerate it, it's an extremely useful drug.

Nor am I opposed to the use of metformin in pregnancy─ when it is indicated, such as with GD and/or PCOS (Polycystic Ovarian Syndrome). The research shows it can be quite useful in those situations.

However, in my opinion, across-the-board use of metformin on all obese women to prevent big babies or other complications is highly questionable.

That doesn't preclude its use in a carefully monitored research setting, please note. If non-diabetic women of size have been given full informed consent about it and want to participate in a research study on its use, I'm okay with that. They get to decide for themselves whether they think participating in such a study is worthwhile. They should not be pressured or guilted into using it, but if they want to be a test subject then that's their right.

But routine use across the board in all non-diabetic obese women? Pressuring or guilting normoglycemic high BMI women into its use just because they might have a bigger baby? I think the results of these two studies clearly indicate that use is a massive overreach.

The good news is that this study provides further data that use of metformin in pregnancy seems to be reasonably safe. This is great for women with PCOS, type 2 diabetics, and women who develop GD; metformin seems to be clearly helpful in these groups.

The bad news is that it doesn't seem to be very helpful as a way to normalize fetal growth in non-diabetic women.

The bottom line is that care providers need to stop pushing the use of metformin as a way to prevent big babies in high BMI women.


BACKGROUND: Obesity is associated with an increased risk of adverse pregnancy outcomes. Lifestyle-intervention studies have not shown improved outcomes. Metformin improves insulin sensitivity and in pregnant patients with gestational diabetes it leads to less weight gain than occurs in those who do not take metformin. METHODS: In this double-blind, placebo-controlled trial, we randomly assigned pregnant women without diabetes who had a body-mass index (BMI; the weight in kilograms divided by the square of the height in meters) of more than 35 to receive metformin, at a dose of 3.0 g per day, or placebo (225 women in each group) from 12 to 18 weeks of gestation until delivery. The BMI was calculated at the time of study entry (12 to 18 weeks of gestation). The primary outcome was a reduction in the median neonatal birth-weight z score by 0.3 SD (equivalent to a 50% reduction, from 20% to 10%, in the incidence of large-for-gestational-age neonates). Secondary outcomes included maternal gestational weight gain and the incidence of gestational diabetes and of preeclampsia, as well as the incidence of adverse neonatal outcomes. Randomization was performed with the use of computer-generated random numbers. The analysis was performed according to the intention-to-treat principle. RESULTS: A total of 50 women withdrew consent during the trial, which left 202 women in the metformin group and 198 in the placebo group. There was no significant between-group difference in the median neonatal birth-weight z score (0.05 in the metformin group [interquartile range, -0.71 to 0.92] and 0.17 in the placebo group [interquartile range, -0.62 to 0.89], P=0.66). The median maternal gestational weight gain was lower in the metformin group than in the placebo group (4.6 kg [interquartile range, 1.3 to 7.2] vs. 6.3 kg [interquartile range, 2.9 to 9.2], P<0.001), as was the incidence of preeclampsia (3.0% vs. 11.3%; odds ratio, 0.24; 95% confidence interval, 0.10 to 0.61; P=0.001). The incidence of side effects was higher in the metformin group than in the placebo group. There were no significant between-group differences in the incidence of gestational diabetes, large-for-gestational-age neonates, or adverse neonatal outcomes.  CONCLUSIONS: Among women without diabetes who had a BMI of more than 35, the antenatal administration of metformin reduced maternal weight gain but not neonatal birth weight.