Should You Check Your Home for Radon?

January was Radon Action Month. As we finish up January and head into February, let's take a moment to raise awareness of this problem.

Radon is a colorless, odorless RADIOACTIVE gas that can be found in the soil in many areas. It is a leading cause of lung cancer in this country, second only to smoking.

However, there are no immediate symptoms that will alert you to the presence of radon, and you can't see it, smell it, or taste it. Therefore, you won't know if you have high levels of radon gas unless you test for it.

Have you had your home tested for radon? Here's what you should consider when making this decision.

Radon in the Home 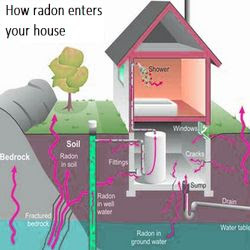 Radon gas is created when radioactive elements (like uranium) decay in rocks and soil. The gas moves through the soil and can be pulled into homes by slight pressure differences. It typically enters through cracks in the foundation, around construction joints, through small gaps near pipes and cables, or through sump pumps and drains. Once inside, it can get trapped and build up to high levels that endanger long-term health.

Homes that have basements, cellars, crawl spaces, or lower levels are particularly prone to high levels of radon, but it can be found even in homes without these. Radon can also be a problem in well water.

But unless you actually test for radon, you can't tell how much is ─ or isn't ─ in your house.

Radon is an important public health issue because being constantly exposed to high levels of radon over time can lead to lung cancer.

How can radon gas cause lung cancer? One article gives a brief explanation:

Radon exposure is the second leading cause of lung cancer after smoking. It is thought that about 13% of all lung cancers are caused by radon exposure.

As a result, some public health commentators believe that radon-reduction campaigns exaggerate the risks to non-smokers and should target only certain areas of the country where radon levels are particularly high. 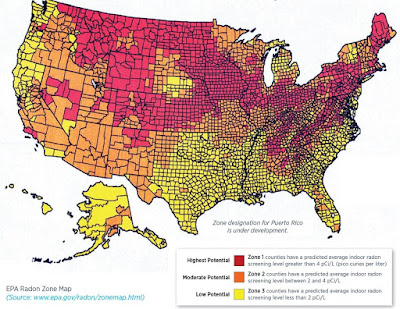 But again, the only way to know if your home is at risk or not is to test. You can live in an area that is at lower risk overall from radon and still have a house that has high levels of radon.

About 1 in 15 American homes are thought to have high levels of radon. Thus, the Environmental Protection Agency (EPA) recommends that all homes should be monitored for radon.

Radon testing kits are relatively inexpensive and can be found in local home improvement stores. There are short-term kits (that measure exposure over a few days) and long-term kits (that measure exposure over a few months, generally considered the most accurate). Follow the directions on the package, then mail in the results. You will notified of the findings soon after and can take action accordingly.

Mitigation usually involves sealing any foundation cracks or construction joints, and installing a way to vent the radon gas from the most affected areas. Some cases can be fixed for a few hundred dollars by someone comfortable with DIY, but more significant cases need trained professionals so it can be done properly, and this cost usually runs $1000-2000.

Because of the cost of mitigation and the uncertainty of the impact of moderate levels of radon on non-smokers, radon testing remains controversial to some. Critics maintain that radon testing is a waste of time in low-risk areas, and should be saved only for high-risk areas or for houses with smokers.

Also controversial is what level of exposure presents enough risk to make mitigation worthwhile. Clearly, high levels of radon (near 20 pCi/L) present significant risk and should be identified and mitigated. Lower levels are more controversial. The EPA recommends an action level of 4 pCi/L whereas other countries recommend 5 pCi/L or even more. On the other hand, some U.S. states recommend getting radon levels down to less than 2 pCi/L. More data is needed.

Why I Care About Radon

Why do I want to educate people about radon? Frankly, I didn't care about it until recently. I heard about it on a TV show many years ago and figured it was just another over-exaggerated health scare to make money for unscrupulous "repair" companies.

However, I changed my mind a few years ago after doing more research into the matter. Frankly, it really looked legit. Nothing to panic over, mind, but something to definitely be aware of.

So we tested our house for radon a few years ago, not really expecting to find a problem. Turns out the area around the kids' bedrooms had quite high levels of radon, even though we live in an area not at high risk for radon. We put in a radon mitigation system post-haste because the levels were pretty elevated. The levels are down to normal now, but we will re-test every few years just to make sure the system is still working efficiently.

I also care now because I think radon may have contributed to my father's death, along with smoking.

Like many soldiers, my father took up smoking in WWII; he smoked for 20 years afterwards. He quit when I was young, but was around second-hand smoke in his job at times.

He also grew up in an area known now for high radon levels. Of course, there's no way to prove that radon had any impact on him. We don't even know for sure that he was exposed. However, the city he grew up in has some of the highest radon levels in that state, and most of the houses there have basements, so I think he probably had a strong chance of exposure.

Although it's impossible to prove, I think the combination of growing up in a high radon area, 20 years of smoking, and years of second-hand smoke tipped him over into lung cancer, even though he had not smoked in nearly 30 years. Sadly, his lung cancer was inoperable. His cancer eventually spread to his brain, and this very intelligent man who loved to discuss theology was reduced to not even being able to operate his TV remote. He died 3 years after his diagnosis. We had to watch him slowly suffocate to death, and that was really terrible.

Sad as his death was, that doesn't necessarily mean that everyone should consider testing; smoking was clearly the biggest culprit in his death. However, the fact that high radon levels were found in my own home nowadays, even in an area not at high risk for radon, suggests to me that more widespread radon testing seems pretty sensible for most areas.

At high enough levels over time, exposure to radon gas clearly increases the risk for lung cancer, which is a very intractable and nasty form of cancer. Therefore, the EPA, Surgeon General, American Lung Association, American Medical Association, and National Safety Council all recommend testing your home for radon.

This testing seems sensible to me, especially if you are in an area known to have moderate or high levels of radon, or if you have smokers or former smokers in your home. It is more debatable in areas at very low risk for radon but personally I would probably err on the side of testing most of the time.

It is also not completely clear at what level of exposure mitigation is truly needed. Certainly high levels need mitigation and I strongly believe in taking action in that situation. It also seems like a sensible precaution to me to treat even at only modestly raised levels but I would like more reliable data on just where that treatment line should be drawn.

Factors in your decision on whether to mitigate may include how high the radon levels are, where in the home these levels occur, how much time people spend in this area, the type of soil around the home, whether there is a history of smoking in any family member, etc. If your test results are borderline, you might want to repeat the test before making a decision, since radon levels can fluctuate over time. More data may give you a better picture of the risk.

It's important to point out that testing doesn't commit you to doing mitigation. The test is very easy, not expensive, and pretty effortless to use. Once you have your results, you can decide what, if anything, to do about it. But you can't do anything if you haven't had your home tested.

Clearly, smoking and radon exposure are an extremely bad combination, so your best prevention is not to smoke. But even if you have never smoked, radon exposure can be a risk. Most importantly, it is a risk that can be mitigated...but only if you test for it.

So while I believe in taking a moderate, sensible approach to radon testing (and would like more reliable data on which to make decisions), on the whole I do think radon testing is worth doing.

But as always, the decision to test or not remains your decision.

You can find out more about radon here, here, here, and here. Click here for a link that will help you find the risks in your particular state.
Posted by Well-Rounded Mama at 12:48 AM