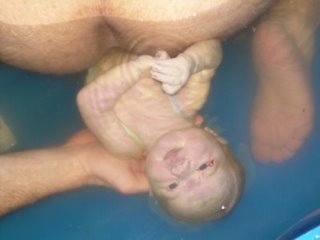 Giving birth in the water is one of the most wonderful things EVER.

I can't tell you how much I loved it, how much it helped with labor pain, and how it made it easier to be really mobile during labor.

It's a terrible shame that it is not offered as an option more widely in the United States.  Certainly, more hospitals in Europe seem to be incorporating it before we do.

One of the objections you hear voiced on occasion by the doctors who resist waterbirth is the idea that it's  not sterile enough and babies would be put at risk for infection.

This study contradicts that idea.  Yes, there were microorganisms in the water, but the babies seemed largely unaffected by them, and in fact had a lower rate of infection/antibiotic use than babies born after "land delivery."

Alas, the study is in Italian so the only information I have is in the abstract, but note that the episiotomy rate in the water was less than 1%, a rate rarely seen in most hospitals.  There's a tremendous benefit right there.

Also note that only 13% of women needed drugs for the pain. This is the "aquadural" effect; many women find that pain is greatly lessened (or at least more manageable) when in the water.

It's not that it totally relieves pain ─ I can attest that it doesn't.  I still felt labor pains intensely during my waterbirth.  However, they were manageable.  The warm water felt WONDERFUL, it helped lessen the pain enough to get by, and I was able to be quite mobile in the birth tub in a way that helped me respond proactively to the pain.

So we shouldn't over-exaggerate the pain-relieving effects of water in labor. For some people it really does take the pain away.  But for many of us it merely takes a significant edge off and helps you cope more proactively with it. (And if it helps shorten labor, I'm okay with that!)

But the point is, waterbirth is helpful and not harmful.  Infection is not really an issue.

Time for more U.S. hospitals to get a clue and start incorporating more waterbirths.

The aim of this study was to document the practice of 2625 water births at Vipiteno over the period 1997-2009 and compare outcome and safety with normal vaginal delivery. The microbial load of the birth pool water was analyzed, and neonatal infection rates after water birth and after land delivery were compared.

METHODS: The variables analyzed in the 1152 primiparae were: length of labor; incidence of episiotomies and tears; arterial cord blood pH and base excess values; percentage of pH<7.10 and base excess values >/=12 mmol/L. In all 2625 water births, the variables were: analgesic requirements; shoulder dystocia/ neonatal complications; and deliveries after a previous caesarean section. Bacterial cultures of water samples obtained from the bath after filling (sample A) and after delivery (sample B) were analyzed in 300 cases. The pediatricians recorded signs of suspected neonatal infection after water birth and after conventional vaginal delivery.

RESULTS: There was a marked reduction in labor duration in the primiparae who birthed in water; the episiotomy rate was 0.46%. Owing to the pain relieving effect of the warm birth pool water, pain relievers (opiates) were required in only 12.9% of water births.

Arterial cord blood pH and base excess values were comparable in both groups. Shoulder dystocia/neonatal complications were managed in 4 water births; 105 women with a previous caesarean section had a water birth.

In sample A, the isolated micro-organisms were Legionella spp. and Pseudomonas aeruginosa; in sample B, there was elevated colonization of birth pool water by total coliform bacilli and Escherichia coli. Despite microbial contamination of birth pool water during delivery, antibiotic prophylaxis, as indicated by clinical and laboratory suspicion of infection, was administered to only 0.98% of babies after water birth versus 1.64% of those after land delivery.

During expulsion of the fetus at delivery, fecal matter is released into the birth pool water, contaminating it with micro-organisms. Despite this, water birthing was found to be safe for the neonate and did not carry a higher risk of neonatal infection when compared with conventional vaginal delivery.

Was there any mention of the dive reflex?
I've heard it only works in colder waters, and some infants have been lost to a form of drowning.
Honestly, I could never give birth underwater. I'd be too frightened, as we are land mammals, and giving birth underwater is unprecedented in my mind for a newborn creature of that status. -Erica

I want to reassure you that if waterbirth is not appealing to you, there's absolutely no need for you to try it. I'm simply passing on more information about it for those interested in it, not pushing everyone to try it. But do learn more about it so that you understand why it's not as dangerous as some might think.

There are a number of inhibitory factors that keep baby from sucking in water and drowning. You can read more about that here:

Remember, the baby is ALREADY in fluid in the womb. It's coming from an atmosphere of "water" (amniotic fluid) directly into another atmosphere of water (birth tub). If baby didn't drown in utero, it won't as it comes out, as long as baby is not left under too long and as long as it's not in severe distress (which is an indication for getting out of the birthtub anyhow).

You don't want to leave baby under the water for a long time because after she's born her system will transform to air breathing, and left long enough there could be danger. So once born, you simply lift baby to the surface gently. Once baby has been in the air, she does not go back under because that starts triggering the changeover. But with a few simple precautions, waterbirth is a very reasonable thing.

One Swiss study, www.pubmed.gov/10971083, found no increased risk to babies in a study of over 2000 waterbirths. "No case of water aspiration or any other perinatal complication of the mother or child which might be water-related was reported."

The Cochrane Collaboration (www.pubmed.gov/19370552) did a meta-analysis of waterbirth studies in 2009 and found:

"There is no evidence of increased adverse effects to the fetus/neonate or woman from labouring in water or waterbirth."

Yes, there are some precautions you take but remember that a lot of interventions women commonly use in labor (pitocin, other induction drugs, amniotomy, epidural, etc.) all have risks associated with them, and probably more than waterbirth.

Again, every woman should choose the kind of things she is personally comfortable with for her birth. If you don't want to use water in labor, that's totally fine and I applaud you knowing your own mind.

But from a risk point of view, waterbirth really is a very reasonable choice for those who want it.

This just reinforces my experience in my first labor- I went into labor late at night and labored rather comfortably in the shower and then the tub before realizing that I was even in active labor! By the time I figured it out I was pushing and we almost didn't make it to the hospital. And that wasn't even in a birth tub, but just my little tub at home. Total labor was 5 hours, and would have been closer to 4 if my husband wasn't distracting me trying to get me out of the tub to the hospital! It was really great, and as I doula I will be recommending laboring in water to my clients. I'm hoping that the new hospital that is being built will allow water births- they have big jacuzzi tubs!

I had my first baby in the big tub at a birth center. I didn't intend to, I just didn't want to get it when it was time to push. It was great! I wish I'd decided to do that with the 2nd one too.

I'm glad you pointed out that it does not relieve all the pain/discomfort of labor. I had a waterbirth at home(a VBA2C!) earlier this year and loved it. I could not wait to get in the tub but was surprised that it was not as great as I thought it would be after reading so many birth stories of the waterdurial effect. For me it was hard to feel grounded to focus on getting through the contractions but the hot water felt wonderful between contractions. I also loved being in the water for the pushing and birth. It was much easier to feel comfortable in the position I ended up in. My baby did not try to breathe under the water either.

Must ask about the photo: babe appears to have a yellowish linear structure passing up the left side, under the arm, and around the back of the neck, and a corresponding bluish structure on the right side. Is the kiddo actually wearing his/her cord like a stole, or is it some kind of photo artifact?

It's not my personal photo so I wasn't there to know for sure, but yes, it looks to me like that's the umbilical cord.

It's not uncommon for the cord to be wrapped in various ways around the baby, and that's not usually a problem. Usually unwraps itself as baby comes out, with a little help from the person catching the baby. (Actually, water really facilitates that process, I'm told.)

So although I can't be sure, my best guess is that yes, that's the umbilical cord, and yup, the baby looks like he's wearing it like a stole!

All the best-dressed newborns.....

I've always wondered if water births are as new a concept as we think. In every old movie where childbirth is features, women run in and out of the birthing room with gallons and gallons of hot water. It's burned into my psyche - if there's a baby coming, you need towels and LOTS of hot water. Why? The only thing that makes sense now to my adult mind is that perhaps there was a nice tub in there!