Long-Term Implications of a High Cesarean Rate in Obese Women 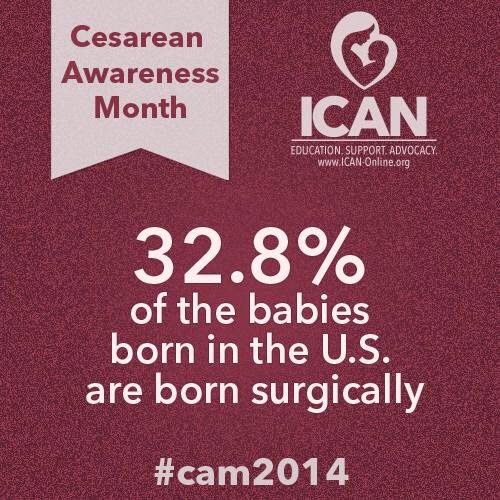 This is an annual observance sponsored by the International Cesarean Awareness Network (ICAN) to raise awareness of the implications of a high cesarean rate and lack of access to VBAC (Vaginal Birth After Cesarean).

It's always important to remind readers that this observance is not meant to make anyone feel bad about having had a cesarean, or to imply that having a cesarean makes you "less of a mother" or "less of a woman." Nonsense.

Cesareans can be life-saving and wonderful when used appropriately, but they are not risk-free. When over-utilized, they can have dramatic negative consequences too, especially long-term.

Cesarean Awareness Month is not about any one person's experience at all, but rather about the widespread public health implications of a high cesarean rate and lack of access to VBAC. And this certainly is an under-appreciated public health care issue.

Long-Term Risks of Too Many Cesareans

As we posted about extensively last year, one of the overlooked long-term consequences of a high cesarean rate is an increase in the risk for placental disorders.

Specifically, there is a substantial increase in the risk for:
Here is yet another study that confirms cesarean section as a strong risk factor for placental disorders.

This is why it is important not to have cesarean after cesarean unless it is medically necessary, and why the ban on VBACs in many hospitals is so frustrating.

The ban on VBAC (Vaginal Birth After Cesarean) in some places means that thousands of women have been and are continuing to be subjected to unnecessary cesareans. This in turn is raising the incidence of placental disorders like previa, abruption, and accreta, as well as maternal morbidity from the surgeries and the very serious complication of cesarean scar pregnancy.

Although with good care, many of these complications can be handled, they do often result in life-threatening hemorrhages, bladder or renal damage, uterine ruptures, hysterectomies, prematurity, stillbirth, and even maternal deaths at times.

Although these complications are overall rare, they are happening to real women, with real results, sometimes devastating ones.

This is why it is SO important to do cesareans only when truly indicated, to avoid automatic repeat cesareans, and to keep VBACs available as an option everywhere.

Implications for Women of Size

Long-term complications of cesareans is a particularly pertinent issue for women of size.

And many of the cesareans done in obese women are done without any labor at all. Many care providers have a de-facto policy of automatic "elective" cesareans for very obese women, despite the fact that this does not improve outcomes.

This disproportionately exposes the larger mother to the risks of cesareans (hemorrhage, infection, blood clots, bladder injury, and anesthesia problems) and subsequent placental disorders. This is insane. Yet few in the obstetric community even question the high cesarean rate in obese women.

This is why observing Cesarean Awareness Month is so important. It's not about putting down anyone who had a c-section, but to raise awareness of the health implications of a too-high cesarean rate.

In addition, it's time for care providers to focus on the implications of the sky-high cesarean rate in women of size and what can be done to lower that rate.

This is why I always observe Cesarean Awareness Month here and why I urge others to do so too.


...OBJECTIVE: To examine the association between CS and three major types of placental disorders (placental abruption, placenta previa, and placenta accreta with its variants increta/percreta) in subsequent pregnancies. SEARCH STRATEGY: ...observational studies published between January 1990 and July 2011 for examining the association between CS and placental disorders in subsequent pregnancies, without focusing on the effect of increasing number of CSs... DATA COLLECTION AND ANALYSIS: Five cohort and 11 case-control studies met the inclusion criteria for this meta-analysis...MAIN RESULTS: The calculated summary odds ratio was 1.47 (95% confidence interval, CI: 1.44-1.51) for placenta previa, 1.96 (95% CI: 1.41-2.74) for placenta accreta, and 1.38 (95% CI: 1.35-1.41) for placental abruption. CONCLUSION: In this meta-analysis, cesarean delivery appeared as a consistently reported risk factor for all three major forms of placental disorders in subsequent pregnancies.


Placenta accreta is an abnormal adherence of the placenta to the uterine wall that can lead to significant maternal morbidity and mortality. The incidence of placenta accreta has increased 13-fold since the early 1900s and directly correlates with the increasing cesarean delivery rate...


...Overall these data support the concept that abnormal decidualization and trophoblastic changes of the placental bed in placenta accreta are secondary to the uterine scar and thus entirely iatrogenic.

Obesity and Over-Utilization of Cesareans

OBJECTIVE: The purpose of this study was to determine the effect of maternal superobesity (body mass index [BMI], ≥ 50 kg/m(2)) compared with morbid obesity (BMI, 40-49.9 kg/m(2)) or obesity (BMI, 30-39.9 kg/m(2)) on perinatal outcomes. STUDY DESIGN: We conducted a retrospective cohort study of birth records that were linked to hospital discharge data for all liveborn singleton term infants who were born to obese Missouri residents from 2000-2006. We excluded major congenital anomalies and women with diabetes mellitus or chronic hypertension. RESULTS: There were 64,272 births that met the study criteria, which included 1185 superobese mothers (1.8%)...Almost one-half of all superobese women (49.1%) delivered by cesarean section, and 33.8% of superobese nulliparous women underwent scheduled primary cesarean delivery.

OBJECTIVE: To compare the outcomes of planned vaginal versus planned caesarean delivery in a cohort of extremely obese women (body mass index ≥ 50 kg/m(2)). DESIGN: A national cohort study using the UK Obstetric Surveillance System (UKOSS). SETTING: All hospitals with consultant-led maternity units in the UK. POPULATION: Five hundred and ninety-one extremely obese women delivering in the UK between September 2007 and August 2008...CONCLUSIONS: This study does not provide evidence to support a routine policy of caesarean delivery for extremely obese women on the basis of concern about higher rates of delivery complications, but does support a policy of individualised decision-making on the mode of delivery based on a thorough assessment of potential risk factors for poor delivery outcomes.

Posted by Well-Rounded Mama at 8:35 PM