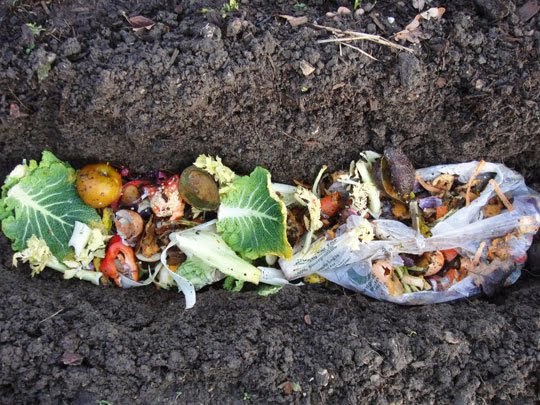 Do you compost your food and garden waste?

For years we didn't. I wanted to, but my husband was convinced it would be too messy and would attract wild animals. Eventually we invested in a composting bin that was completely enclosed to address his concerns.

We did have some fly issues and it was a bit yucky at times, but in time we realized this was because we needed more "browns" (dried leaves, straw, etc.) in proportion to the "greens" (fruit and vegetable peelings etc.) we were putting in. Once we worked that out, our little enclosed compost bin worked fine for our small suburban lot. And it was great to be able to harvest the finished compost and put it around my plants in the yard. Much better than feeding the plants a bunch of artificial chemicals.

Once we moved to a larger place out in the country, we wanted to increase our composting efforts. The little compost bin was just not going to cut it out here. We've tried several different things instead, including a couple of different rotating compost bins and a traditional compost pile. However, since we put the kids in charge of taking care of the compost, we've had more problems, as they rarely added "browns" to the "greens" of our food waste. We tried to do that ourselves, but just didn't get out there often enough to really do it well, frankly. And rarely did anyone get around to turning the compost to aerate it properly. So the compost has been a bit rank at times.

This year I decided to try trench composting instead. There was a whole bunch of rather slimy compost from the bins that needed some major resuscitation, and it didn't seem to be responding very quickly to adding more browns. So this fall, after we finished harvesting our raised bed gardens, we dug a sizable trench in most of the raised beds. (This is not very difficult in the nice loose soil of raised beds.)

Then I had the boys dig out all the slimy half-compost from our compost bins and spread it in the trenches. That was the worst part, but only because we'd let the bins get so rank via procrastination and laziness. If we were adding fresh food scarps, it wouldn't be nearly so onerous, I think.

We then added straw and dried leaves and mixed it in a bit. In some areas I added a little bone meal too, as well as some alpaca manure we got from local alpaca ranches. I also added some remineralization dust from a gardening store to restore the calcium and other minerals that tend to get depleted from the soil by heavy feeding plants. Then we covered it all over with dirt and left it. Really, we didn't do that much, and it wasn't hard at all. If we hadn't had to dig half-finished compost out of the slimy bins, it wouldn't have been a difficult or yucky chore at all.

Frankly, I was pretty pessimistic about trench composting, considering how cold the weather was. I just didn't think the compost would get warm enough to effectively "process" all the materials very quickly. I figured I might be planting my garden in the spring into a bunch of slimy, half-rotted food. But I had all this nasty half-compost from the rotating bin that had to be taken care of, and burying it seemed a lot less offensive than trying to process it above ground in the rain and snow this winter. So we buried it and crossed our fingers.

We had some nice weather recently so I decided to go out and check on it and see how it was doing. I was pretty tentative at first because I was expecting it to still be rather rank.

But to my surprise, it was doing really well! Some of the trenches had already almost completely turned to full compost! I couldn't believe it went so much quicker than what it had been doing in the bins. And animals hadn't bothered it at all.

Now, not all of it has completely broken down yet in every location. You can see some "bits" left in places. One bed, whose contents weren't very buried at all because of a lazy child, still has a ways to go, so we tried to bury that area more and give it some more carbony browns (plus some alpaca poo). Fortunately, we won't be planting much for another month or two anyhow in that bed, so hopefully it will be fine by the time we are ready to plant there. If not, we'll just plant around any leftover bits.

On the whole, I was surprised at just how quickly things had broken down in just a couple of months (and rather cold winter months at that).  Sure, the compost was half-done already from the compost bins, but really, it'd been going extremely slow in the bins. This was much faster and a lot less nasty. I'm looking forward to seeing how my tomatoes do this summer with all this wonderful compost in the soil, refreshing it!

As the kids take out the food scraps now, I ask them to dig a hole somewhere in one of the raised beds and bury it. If it's too dark or the ground is too frozen, they still use either the traditional compost pile (which is still going) or the rotating bin. So we don't do trench composting exclusively; we have multiple types going. But based on our results so far, I think we'll be doing far more trench composting as our garden allows.

I know trench composting isn't totally practical in some areas or living arrangements, but if it works for your situation, it really is a nice way to take care of your kitchen food waste and benefit your garden at the same time. Long-term gardening is all about replenishing the soil and building it up, so trench composting is a great way to accomplish two goals (taking care of food waste and replenishing your soil to increase garden yields) at the same time. It helps you towards both sustainability and self-reliance. Definitely a win-win proposition!
Posted by Well-Rounded Mama at 2:23 PM