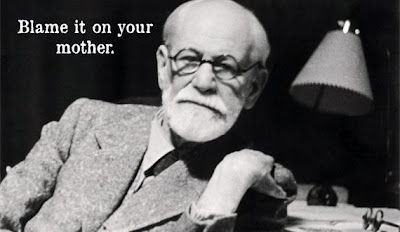 I thought these research abstracts, published recently, deserved to be displayed together for sheer irony.

The second points out the unfair nature of this parent-blaming and the sexist, mother-blaming nature of most of the media messages around public health campaigns against child obesity.

The third helps refute the common idea that fat kids eat excessively and that fatness is always related to the amount of calories consumed.

Unfortunately, it is only the first message only that is being communicated to the public these days. Here's the typical take-away message that many people get from childhood obesity public health campaigns:


If a child is fat, it's THE PARENTS' FAULT, and they are bad parents to have "let" their child get that way (and it's especially the mother's fault because it's her job to see that everyone is healthy).

Parents of fat children have failed in their duties as a parent, and perhaps their child should even be taken from them.

If a child is "morbidly obese," then the parent has allowed him to become that way, and that is a form of child abuse.


The idea here is that a minor who is morbidly obese has an unacceptable amount of health risks due to, basically, the gross negligence of their parents...they have to be taught to lead a healthy lifestyle, which they obviously haven’t been taught yet thus far.

"Gross negligence of their parents"?  Because no child could possibly be morbidly obese unless their parent was force-feeding them huge amounts of junk, right?

"Shoveling food down their kids' throats"? Really?  Because children can only be obese if they are consuming huge amounts of calories?  Because their parents are lazy or ignorant and don't know anything about feeding "healthy" food?  Because all that's needed for fat kids to slim down is to unplug the TV/computer and exercise a little restraint at the dinner table, right?

The societal pressure on parents of fat children is tremendous.  Look at some of these quotes from people about the stories on removing fat children from parental custody.


-I get extremely frustrated when I see an obese child. I mean, REALLY frustrated. I immediately look to the parent to see why this child is overweight. Is the parent obese as well? Is it just carelessness? Does the parent not see it? Does the child have a thyroid problem? Can they not afford healthier food? All these questions run through my mind, and yes, in that very moment I do want to snatch the child away from the parent. I want to bring the child into my home and introduce them to REAL food, that nourishes their growing body....

-I get sooooo angry when I see obese kids too. I literally want to punch the parents in the face and tell them to wake up!!

This idea that parents are solely responsible for making a child fat and that this is tantamount to bad parenting and child abuse drives so much of the discussion around "childhood obesity" hysteria these days, yet this perception is fundamentally flawed.

A fat child does not equal child abuse.

A FAT CHILD DOES NOT EQUAL CHILD ABUSE.

Yet there are a number of health and social care professionals that seem to believe it does:


Does allowing a child to become morbidly obese qualify as child abuse? Some health and social care professionals believe it is a question that needs to be considered more seriously...

"It is my view that child obesity should be treated as a form of child mistreatment, as any type of under-feeding is," says Joanna Nicolas, a child protection consultant who has been a social worker for 17 years.

"If a child is obese it is a form of abuse because of the physical impact on the child, the implications for their future health and the psychological impact," she told Radio 4's The Report.

This is parent-blaming at its worst. It is a reflection of negative public health discussion that views obesity as a entirely voluntary state, caused by bad habits, laziness, and/or ignorance about nutrition, and a condition that is supposedly easily modifiable by reasonable behavior.

Yet if obesity were so easy to prevent and/or treat, why hasn't been it taken care of by now? Why don't the many obesity intervention programs out there result in more permanent weight loss? Why do most weight loss intervention studies tellingly not include long-term follow-up? Why do study after study show only a small number of people losing weight and keeping it off long-term? Why do many people who initially lose weight end up heavier in the long-term after dieting? Are that many people really that weak-willed and ignorant?

Why do many super-obese people who have SURGERY to restrict their stomachs and re-route their intestines still remain clinically obese, even after losing lots of weight? Why do they often remain fat to some degree (and even regain lots of weight after a couple of years) despite being unable to eat a lot of food or absorb many nutrients from the food they do eat?

Could it be that fatness is related to factors other than just intake and output?

The only way healthcare and social professionals can explain the tremendous statistical failure of diet programs is by blaming fat people themselves.  In their view, it can't be the fault of the diet/lifestyle programs, it can't possibly be from some metabolic difference, nor can it be because there are strong biological mechanisms for defense of body weight.

No, it must be fat people's own intransigence, laziness, ignorance, lack of self-discipline, or unwillingness to change habits that is behind their continued fatness.

And because this is the narrative that society wants to hear, this is the message they are given, over and over again in the media.  Read the stories featured in the media and see how rare it is to see a message that doesn't conform to this paradigm. As Abigail Saguy discussed in her excellent article for the Washington Post:


The way we talk about fatness as a medical issue and a public health crisis brought on largely by reckless personal choices may be worsening anti-fat prejudice and related health problems.

And that is just incredibly frustrating and alarming to the parents of fat children everywhere.


We investigated the representation of obesity in the Irish media by conducting an inductive thematic analysis on newspaper articles (n=346) published in 2005, 2007 and 2009 sampled from six major publications. The study analysed the media's construction of gender in discussions of obesity and associated attributions of blame. Three dominant themes are discussed: the caricatured portrayal of gender, women as caregivers for others, and emotive parent-blaming for childhood obesity. Men were portrayed as a homogenous group; unaware and unconcerned about weight and health issues. Dieting and engaging in preventative health behaviours were portrayed as activities exclusively within the female domain and women were depicted as responsible for encouraging men to be healthy. Parents, specifically mothers, attracted much blame for childhood obesity and media messages aimed to shame and disgrace parents of obese children through use of emotive and evocative language. This portrayal was broadly consistent across media types and served to reinforce traditional gender roles by positioning women as primarily responsible for health. This analysis offers the first qualitative investigation into the Irish media discourse on obesity and indicates a rather traditional take on gender roles in diet and nutrition.

Children placed in foster care for being too fat have sometimes gotten temporarily thinner in care, as most people do with a diet. But rarely do they become a "normal" BMI and usually the weight doesn't stay off, as it usually doesn't in any study with more than a year or two of follow-up.

So the authorities say, Look, we got the child to be thinner! They return the child, the child regains the weight (as nearly all people do), and the mother is blamed again.

NAAFA has tracked some of these cases, but doesn't have the money or resources to track them all.

I also recall seeing a case from quite a while ago where a super-fat toddler was taken from his home, much publicity was made of his "neglectful and ignorant" parents, the case was on a bunch of talk shows, and everyone shook their heads over the terrible parenting that "let" that child get so fat.

A year or so later, I remember hearing a small follow-up on the case, barely publicized at ALL, where the authorities admitted the child had a serious medical problem (I don't recall what it was) that was the real source of his weight. It wasn't the parents' fault at all, but a genetic thing. But that got almost NO press.

I wrote about this previously here:

And here's NAAFA's take on it:

Here's the case of Anamarie Regino, who was taken from her parents many years ago but didn't lose weight in foster care:

I live in constant fear of CPS not only because my child is fat, but because I do pretty much everything against the norm. Homebirthing, bed sharing, feeding my child raw milk, no vaccines, we almost never go to the doctor, definitely do not ever give antibiotics, I let her run around naked if she chooses, I don't hellicopter parent and allow her freedom to do what she wants within reason, and eventually I will home school as well. I'm sure there are social workers who would faint looking at my family and try to get me thrown in jail.