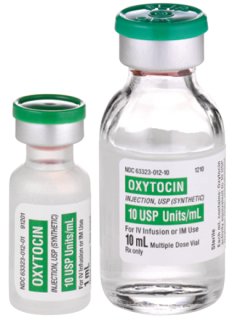 Here is a big, major recent study from the NIH that shows just how pervasive induction of labor is in U.S. society today and how it influences cesarean rates.

This study covered 19 hospitals across the U.S. over the space of a number of years.  It shows that nearly half of all first-time mothers are having their labors induced these days, and almost a third of those who have children before (multips).

Of those who are induced, a third of first-time mothers and nearly half of multips had an "elective" induction or "no recorded indication for induction" at term.  In other words, most of the time, these inductions are not being done for legitimate medical reasons like high blood pressure or serious concerns about the baby's well-being; instead, they're largely being done for convenience.

Yes, some moms ask for induction because they get tired of being pregnant, so some of this is being driven by consumers.  But it's also being strongly driven by many OBs who want to practice "daylight obstetrics" ─ induce in the early morning (or start the night before), break their water at noon, and be home in time for dinner.  Many start mentioning induction early in the pregnancy, planting the idea, so that when the end of pregnancy comes and women are uncomfortable, they are primed and ready to agree to an induction before it's really needed.

The question is whether nearly half of women should be induced, and what kind of risks are being imposed by this strong drive for induction of labor.

It also shows that inducing first-time moms presents a particularly high risk for cesarean, that cesareans are often done too early ("failure to wait"), and that inducing on an unripe cervix (low Bishop's Score) also often leads to cesareans.

[These are particularly relevant points for "obese" women, as I've pointed out before.]

All these have strong implications for lowering the national cesarean rate, as the authors note in their conclusion.  But are most care providers listening?  As I've said previously:


The $64,000 question is ─ will the publication of this study make any difference? Will hospitals change their policies and induce less women? Will doctors wait longer before resorting to cesareans? Will doctors and hospital administrators reverse their formal and informal VBAC bans? Will everyone involved make a concerted effort to reduce the cesarean rate ─ or will it just continue to be business as usual?

It's positive that the questions are being asked and dialogue is being opened ─ but I am not holding my breath. Perhaps this is the beginning of a reversal of the pendulum, but the momentum is so strong towards inductions and cesareans right now that it's going to take a mighty counterforce indeed to really reverse things.

It's up to us to be part of that counterforce for change.


OBJECTIVE: We sought to describe details of labor induction, including precursors and methods, and associated vaginal delivery rates.

STUDY DESIGN: This was a retrospective cohort study of 208,695 electronic medical records from 19 hospitals across the United States, 2002 through 2008.

RESULTS: Induction occurred in 42.9% of nulliparas and 31.8% of multiparas and elective or no recorded indication for induction at term occurred in 35.5% and 44.1%, respectively. Elective induction at term in multiparas was highly successful (vaginal delivery 97%) compared to nulliparas (76.2%). For all precursors, cesarean delivery was more common in nulliparas in the latent compared to active phase of labor. Regardless of method, vaginal delivery rates were higher with a ripe vs unripe cervix, particularly for multiparas (86.6-100%).

CONCLUSION: Induction of labor was a common obstetric intervention. Selecting appropriate candidates and waiting longer for labor to progress into the active phase would make an impact on decreasing the national cesarean delivery rate.

Posted by Well-Rounded Mama at 4:49 PM

I bet those numbers are too LOW, unless my homebirth/birth center buds its ALL I hear about - heard about two today actually. When I asked why for one she just shrugged her shoulders

Wow. Wow. Wow. Those are some scary numbers. Educating women as much as possible about the risks of induction seems to be a good path to take, but many women aren't up for challenging their ob/gyn even if they do have the facts. When you're in pain or exhausted it's easier to just say 'ok'. :*( Just another way the medical system takes advantage of women to get its own way.

I agree with Jenin, education is the way forward. Educated choice is a better option than legislation and generally leads to a better outcome.

Having talked to mothers after they have just experienced one of their "firsts" (first 3D ultrasound etc), as well as the reasons above I can understand why excitement/exhaustion can lead to these decisions.

But how many people would knowingly increase risk to themselves and their baby to save on a few hours of discomfort? Not many once educated I believe...