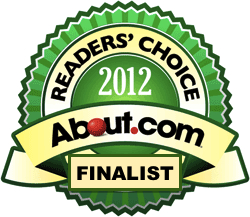 So, this blog recently got nominated by readers of about.com as one of the Top Five Pregnancy Blogs this year.

I don't do a lot of self-promotion, and I constantly have people telling me that I need to be doing more social networking.  I'm a product of my baby-boomer generation, I guess, and I just find the whole Facebook and Twitter thing annoying and egotistical, not to mention being way too much of a time drain. I'd rather spend my all-too-minimal computer time doing something more substantive. Plus, these contests are often just a way to drive more visitors to the sponsoring organization's webpages.  It's very clever viral marketing, so I'm a bit cynical about participating in that.

And yet, I do feel it's an honor.  I know the author who runs about.com's pregnancy content, and she has consistently worked for women's best interests for years. She's not just out there trying to buy her way into more hits; she really cares about supporting women and giving them good information so they can make informed choices about their care.  This is one way of doing that.

So I got to thinking about this contest as a way to spread the word about the relatively unknown concept of Health At Every Size®, about the need for dignified and respectful treatment for women of size, and about important pregnancy and birthing issues we discuss here that apply to all women, regardless of size.  It's great to work on substantive issues, but it's even better when people actually read your messages about those issues.  It's the difference between preaching to the choir and reaching out to a whole new audience, some of whom may really need to hear those messages.

So it's with some embarrassment but also some grit-your-teeth-and-just-do-it determination that I'm letting folks know about the contest.  If you've found this blog useful at all and are so inclined, just click on the link below and go vote. You can vote now through March 21st. You can only vote once each day, but you can vote more than once.  Don't feel you have to vote, but if you want to, I thank you for helping to raise awareness of these issues to a whole new audience.  Here's the voting link:

I really don't expect the blog to win, as we're up against some really outstanding and social-media-savvy blogs (personally, I voted for The Unnecesarean!). However, if we have a good showing, then perhaps more people who don't know my blog will come and check it out. That's all I'm aiming for.

Thanks for thinking about it.  Shameless-and-embarrassing plug over now.  We return you to our regular programming.

(And yes, I'm still holding my nose and considering the whole Facebook thing. I know you young whipper-snappers don't understand resistance to Facebook, but us old geezers just have a great distaste for the whole concept. Or at least this old geezer does! But I suppose it has its uses. I'll think about it....)
Posted by Well-Rounded Mama at 1:09 AM

Email ThisBlogThis!Share to TwitterShare to FacebookShare to Pinterest
Labels: blog purpose and management

Your old bmom friends have been talking on a Facebook group about how they miss you and one other old-school bmom who lives in Canada now. Maybe your ears are burning.

I’m super excited your hard work is being rewarded beyond the lives you touch (though that truly is the best reward of all)! Congratulations – this nomination is something to be celebrated and promoted. I often promote your writing on my Facebook page and website. You’re truly inspirational!