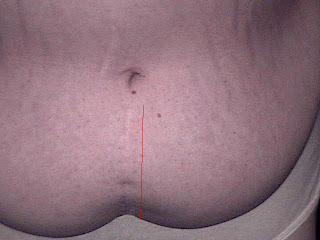 We have blogged about this before, but here's yet another study that vertical (up-down) cesarean incisions in "obese" women have more complications than low transverse (side-to-side) incisions.

As we've  noted before, sometimes there can be legitimate justification for using a vertical incision. However, most of the time, its use in fat women springs from outdated and non evidence-based teachings that an incision under the belly (pannus) predisposes the wound to infection, and that a vertical incision will supposedly lower the risk for infection and improve outcomes.

Yet when researchers finally got around to actually studying the question, they found that vertical incisions either did not improve outcome OR significantly worsened it, as in this study, where incision type was associated both with infectious complications and with wound separation.

Notice that in this study, ~46%% of "morbidly obese" women with vertical incisions experienced a wound complication of some sort.  Nearly half!

In comparison, only ~12% of morbidly obese women with low transverse incisions experienced a wound complication.

More and more data is accumulating to show that the most optimal incision is usually the low transverse incision, even in very fat women.  When will doctors heed their own research?

Conclusion: In morbidly obese women both infectious and separation-type WC are more common in vertical than low transverse incisions; therefore transverse should be preferred.

Posted by Well-Rounded Mama at 9:00 PM

I was cut this way and I was not even obese at the time :( I was then re-cut the same way for my second birth of course. Both c-secs unnecessary but I won't even get into that. My Dr. claimed to have cut me that way because I was expecting a big baby *sigh*

I was 'morbidly obese' with my second, who was c-section due to the heartrate not recovering and all sorts of things that slowed down labor until it was dangerous. The cut was a low horizontal cut, I had discussed with my doctor how I wanted more children and he had done that even though I had been laboring and he suspected a big baby (wasn't big.) I didn't realize how lucky I was that he cut me like that rather than vertical until far later. I was up and about immediately, within a week the wound was nearly healed, within 2 weeks the stitches were taken out, and within 3 you could hardly tell where the cut was unless you knew. All of this with a huge apron laying over it (I'm not small.)

Any doctor who says that they can't because of a woman's size needs replacing. My doctor may not be perfect in a lot of ways, but even he handled the low horizontal with no problems.

Thank you so much for posting this research. I am being faced with a c-section and the doctor is pressing to do the 'classical' vertical incision, which had seemed idiotic to me at the time and even more irresponsible now given the research you have listed.

The research you presented will help me defend my position and either make me find a new OB at 37w or at least get a healthier c-section.