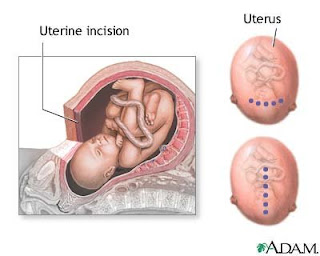 Recently, we discussed cesarean incisions in "obese" women, and specifically the pros and cons of a low transverse (side-to-side) incision vs. a vertical (up-down) incision.

As we noted before, for many years doctors were taught that doing an incision under an obese woman's belly fat ("pannus" in medical jargon) made it prone to infection because of the "bacteriologic cesspool" (yes, actual quote) found in the warm, moist conditions in that area.  Many were therefore taught to do a vertical incision in very fat women to lower the risk for wound complications.

However, some studies show a greatly increased risk for wound complications/blood loss with vertical incisions in obese women.  Yet to this day, many still cling to this teaching, despite a lack of support in the medical literature for it.

Just after my post on the topic was published, a new study on the subject came out.  Here's what the abstract says (my emphasis):

Sure makes it sound like a vertical incision is just as good as a low transverse one, right?  But look more closely at the full text of the study and the picture begins to change.

What The Study Really Shows

In the study, the number of vertical incisions was n=25, whereas the number of low transverse incisions was much higher, n=213.  The authors note that this was not enough to conclusively decide which incision was better, and that bigger trials were needed.  Very true.

Although the abstract gives lip service to this, the phrasing in the abstract makes it sound like vertical incisions did not result in worse outcomes, but that they needed larger studies to confirm that.

The authors were quite forward with this information in their conclusion:


We found that vertical skin incisions are associated with increased odds of postoperative wound separation, although this difference did not reach statistical significance. Although many variables factor into a surgeon’s decision on what type of skin incision to perform, the results of our study do not support the use of vertical skin incisions to reduce wound complications among obese women at the time of cesarean delivery.

That doesn't sound like what the abstract was implying, does it? Too bad the editors of the journal did not see fit to word the abstract more clearly.  They should have acknolwedged that there was no statistical significance, yes, but that there was a strong trend towards worse outcomes with vertical incisions, and that the study was underpowered to detect a statistically significant difference.

They did acknowledge the need for larger studies, but in the context of this abstract's wording it sounded like they needed larger studies to confirm that vertical was just as safe ─ when that's not at all what the authors said in the study.

OBs are very busy people and they often do not have time to read the full text of every journal article they run across.  Many just go by the conclusion of the abstracts.  Unfortunately, this abstract gives the mistaken impression that vertical incisions have outcomes just as good as low transverse incisions, when what data we have does not support this.

A more definitive study is needed, one with a large enough sample to confirm or deny whether vertical incisions are associated with poorer outcomes.  All our research so far suggests that they are, but what we need is access to a really large database that records maternal BMI, types of incision used, and tracks post-op complications thoroughly. Perhaps the MFMU database? Researchers, are you listening?

Vertical incisions don't "prevent" infection or improve outcome in any way; research suggests it actually increases blood loss, operative time, and wound complications; it increases the likelihood of a classical uterine incision underneath (which is associated with more morbidity short- and long-term); and it creates an ugly scar that negatively impacts a fat woman's sense of self.


Considering the number of cesareans done every year on women of size, it's time someone accessed a large database and debunked this outdated teaching once and for all.  Until that is done, however, doctors need to acknowledge the clear trend in the research and not use vertical incisions routinely in women of size.

I'm so glad to read this thoughtful post. I had two horizontal C-secs. The second one separated and had to be re-stapled (really not fun at all). I think it's important that if a woman is facing a c-sec that she ask what type of incision will be used, and most women don't even know know there are options.

When I had my c-section in 2005 they cut me vertical. Stating that there would be less chance of infection. Well it ended up badly infected and didn't heal right...

It really upsets me to see so many big moms still getting vertical skin incisions (usually complete with JP drains... don't even get me started) with dozens of staples. They look awful, and I have no doubt they *feel* awful as well. Worse, these moms assume they have a vertical uterine incision as well, forcing them into repeat sections without any conversation or consideration at all. In reality, the OBs here do comparatively few vertical uterine incisions; our repeat section rate is outrageously high (well over 90%), even though the vast majority-- even among the obese moms-- would be acceptable VBAC candidates.