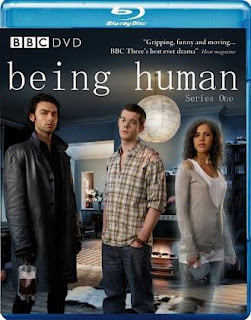 A quick post to promote the BBC series, Being Human. It's a series about a vampire, a werewolf, and a ghost who all share a flat in Bristol, England and try to discover what it means to "be human."

The show is funny, scary, and at times, quite compelling in its storylines.  The actors are good, especially Russell Tovey as George the Werewolf.  He twitches and overacts and chews the scenery (sometimes literally) but somehow pulls it off anyhow with cheek and a touching vulnerability.  Annie the Ghost starts off as weak-willed and victimized but gains strength and chutzpah by the end of the series and it's a nice transformation to behold.  Mitchell the Vampire is a bit more muddled but even so, the character works, especially in his interactions with Annie and George.

This was first produced as a one-off show, a pilot without a commitment to a series, a few years ago.  It gained enough of a following that it returned as a 6-episode series follow-up, albeit with new stars in 2 of the 3 main roles.  Season Two begins soon on BBC America.  Season Three has been ordered (but reportedly will move to Cardiff, Wales), and the SyFy Network in America has ordered an American remake of the series (bleah, they should have just gotten the BBC series rights).

The British version was written by Toby Whitehouse, who has written episodes of Doctor Who and Torchwood.  Now, while my husband and kids love Dr. Who, I'm not quite as big a fan......but I loved this show.  It was a huge surprise, and a very pleasant one.

Being Human really is worth giving a chance to, even if you're not a big sci-fi buff.  The vampire blood bits and the final werewolf effects are way cheesy (as all screen vampire and werewolf stuff inevitably is) but a lot of other stuff is more unexpected and less cheesy.  There is some horror stuff, be warned, but it's not horribly excessive. The best part of the show is the humor; we laughed quite a bit at the show and we totally didn't expect to.  There were also some touching moments to balance the humor and the horror bits.

Right now, you can catch Season One in repeats on BBC America or other channels as a lead-up to the premiere of Season Two on BBC America this weekend.  If you can, I highly recommend watching the whole of Season One first.  The story arc starts off a bit weak but gets stronger, and the Season ends with a bang.  Definitely worth seeing before trying out Season Two.

I have no idea if Season Two will be any good.....sometimes you get a really promising Season One and a huge disappointment in the next season.  But if you are a sci-fi fan at all.....and maybe even if you're not.....this series is definitely worth checking out. It has been one of our favorite new shows of the year.....and it's great to have new content to watch in the summertime.  Give it a chance!
Posted by Well-Rounded Mama at 3:50 PM

Email ThisBlogThis!Share to TwitterShare to FacebookShare to Pinterest
Labels: scifi

OMG I love it too!
I'm so excited about the new season. you got some good taste Kmom!

It's a wonderful show - my husband downloaded the pilot for me and we've both been hooked since! Am looking forward to the third season!

I tried to watch the first season but couldn't get into it.

I'm a huge horror fan and Russell Tovey is a major cutie, but I'm not sure why it didn't hold my interest. I love Doctor Who, Torchwood and Life On Mars though.

That will be all.