Oven-Roasted Tomatoes: Food of the Gods 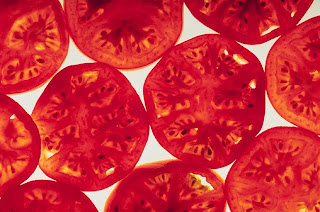 I posted earlier about the over-abundance of produce my garden was making, and how puzzled I was at how some people turned their noses up at getting free fresh organic produce.

(Interestingly, that post got the most comments of anything I've ever written about on this blog. Fat people actually like vegetables....who knew, eh?)

Now, here we are at the end of tomato season, and I'm drowning in tomatoes. I'm giving them away right and left to those who are open to receiving, and I still have more. The weather is about to go bad so I know I'm on the last gasp of sun-ripened loveliness, so I hate to give them all away--yet I have more than I'll ever eat fresh.

Ah, but now I know what to do with them! I found the greatest recipe over the weekend, and OMG, is it good! It's so easy that I decided I have to share it here.

Food of the Gods indeed. You have to try this.

As I posted about previously, I've been wanting to make my own spaghetti sauce with these tomatoes all summer, but I'm not an enthusiastic cook and I can think of a lot of other things I'd rather do with my time than stand around in a hot kitchen, tending 'maters.

My mother-in-law, bless her, tried to help out by stewing a bunch of my extra tomatoes (without asking me! Augh!) but that's not good spaghetti sauce in my book. Too watery, not enough flavor. We'll freeze it and add it to chili later in the winter but meh. I'm just not a cooked-tomato kind of gal.

A friend mentioned oven-roasting the tomatoes and then turning it into spaghetti sauce. The oven dries up a lot of the juices so it's not so watery for the sauce, she says. And it concentrates the flavors, apparently. So I thought I'd try that, once I found a little time.

Well, I'm still looking for that extra time, but the end of the tomato season is upon us so my hand was forced. It's cook 'em or throw 'em onto the compost pile, so I made some time for it over the weekend. And am I glad I did.

Oh. My. God. This was almost a religious experience, it was so good. And really, it was very easy, which is always a key recipe ingredient in my book. And it actually made cooked tomatoes taste good! Amazing. Never thought I'd see the day when I enjoyed cooked tomatoes.

How To Roast Tomatoes

You wash your tomatoes. It doesn't matter what kind you use. I used big red 'maters, golden, orange, Romas, heirlooms, cherry 'maters, you name it. They all work.

Cut 'em up. I quarter the big ones, and halve the small ones. They cook faster that way. Toss 'em with a little olive oil, then place them on an oiled cookie sheet.

Slice up some onions and toss them in with the tomatoes. Put in some unpeeled garlic cloves too (not peeling them lets them steam instead of dry out, and tends to make them more flavorful and less bitter). Sprinkle it all with a little sea salt, a little oregano and thyme, and whatever other spices float your boat. There's no exact science to it, just throw in whatever sounds good to you, in whatever proportions you like.

Then roast 'em in an oven on 400 degrees for about an hour or so, till they are semi-dried up but still all bubbly. (You choose how dry you want them to get; still a little bubbly is how I like mine.) If you arrange your oven racks properly, you can roast two pans at once.....and trust me, you're going to want to! I did four pans over the weekend and could've done more if I'd had the time.

When they are done, let 'em cool a tad, then use a spatula and scoop them off into a bowl. Taste, and know you've gone to heaven....even if you're not much for cooked tomatoes. Rinse and repeat till you are out of tomatoes or out of storage space.

Sorry, I have other things to do than stand around for hours watching tomatoes roast, so I went with the fast-roast method and it was GREAT. However, if you really want truly dried tomatoes, the slow-roast option may be better. Or try a solar oven for a really long-roasted option that doesn't use up a ton of electricity. I hear that works pretty well.

There's no real big science to all this; experiment to see which way you like it the best. It's okay if you make your oven hotter or cooler than mine, or if you cook it longer or slower or add other ingredients or whatever. That's what I like about this recipe...it's so adaptable. And it's really easy, which is good for lazy people like me.

Did I mention yet it is easy?

Now, once you have the oven-roasted tomato/onion/garlic mix, you have many options. You can eat them as is.....and OH, they are great that way! Or you can freeze them in a Ziplock bag for later use in chili or stirred into pasta or whatever. Or you can chop them up fine with some olives and things for a savory topping for fresh bread. All that's quite tasty too.

Or you can make spaghetti sauce from it like I did.

Hunt down all the unpeeled garlic cloves in the roasted mixture and then squeeeeeze them from one end. The roasted garlic will ooze out the other side, into your roasted tomatoes. Whir your onion, garlic, and tomato mixture in the Cuisinart or blender and voila, spaghetti sauce to die for. Easy peasy.

Add your choice of meat if you'd like, or eat it vegetarian...whatever floats your boat. Add some red wine if you like a little "bite" in your spaghetti sauce. Or sneak a few extra veggies into your Cuisinart if you want to up the vegetable count in the sauce without any ankle-biters knowing it. There are sooo many different ways to enjoy this; have fun experimenting with it. Freeze any extra and enjoy it in the middle of winter. YUMMMMM.

My fresh-made spaghetti sauce turned out lighter in color than bottled spaghetti sauce (probably from all the yellow and orange tomatoes I used) so it doesn't look quite the same, but it tastes amazing. Even my tomato-hating kids liked it and ate it enthusiastically. I'm making more this week with the last-gasp remnants of tomato season.

I'll still buy bottled spaghetti sauce and enjoy it too, but this stuff.....now that's the really good stuff. It's like comparing wine in a box to a really good fine wine--they're both pretty good, and they both do the job, but ooooooh, only one is truly a tastebud extravaganza of delight.

Now I actually have a reason to hope for an abundance of tomatoes next year. I have a hunch there will be a lot less tomatoes being given away from my household next year!

Comments section is now open for other end-of-season tomato ideas.........
Posted by Well-Rounded Mama at 2:13 AM

Mmmmm, yes yes yes. From one well roudned mama to another, roasting brings out the best in so many vegetables (and fruits, since tomatoes are kind of a bit of both).

Here is what I did with my roasted tomatoes. I made a yummy hot sauce.

I love roasted tomatoes too. Another thing I like doing is slicing them, then sprinkling with sea salt, garlic, and herbs, and a little bit of feta cheese, and broiling just long enough to make the cheese all melty. You need a knife & fork to eat them, but it's awesome, especially if you throw them over baby spinach leaves or your salad/greens of choice.

Now I add carrots to the mix when I roast my tomatoes, just to add a little extra nutritional boost. Not too many or it will be too sweet, but a little is very good indeed.

For garlic now, you can buy big bags of garlic cloves already peeled. That saves a lot of time on this recipe also.

One thing to remember is that this sauce must be frozen to preserve it. It has too many vegetables and the roasting takes away too much of the acidity to can it safely. I asked a canning expert about it and she said it sounded wonderful but to be on the safe side, it should be frozen instead of canned. Too hard to predict the acidity with precision otherwise, and the acidity level is key to canning tomatoes safely.