In Memory Of Mama Afrika 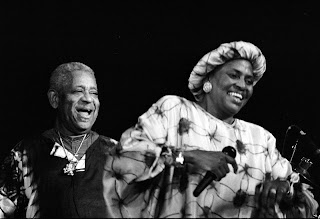 For some years I have been a fan of Miriam Makeba, also known as Mama Afrika. I was saddened to hear of her recent death, at the age of 76.

She was born in South Africa, spoke out against apartheid, and was exiled from her country because of it. Her passport was revoked in 1960 when she tried to return for her mother's funeral, and her citizenship was revoked in 1963 for speaking out to the U.N. about apartheid.
I came to her songs late in her career but was immediately captured by her joy, her passion, her energetic singing. She was a Grammy award-winning artist, and that honor was well-deserved. Check out her music if you get a chance.
You can read more about Miriam Makeba at:

Posted by Well-Rounded Mama at 9:19 PM

"Pata Pata" is the best song ever to dance to. Thanks for the tribute; she well deserves it.