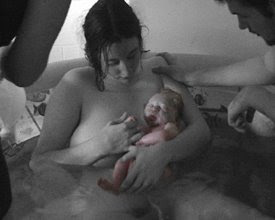 In previous posts, we have been discussing BMI restrictions on laboring and birthing in water, and whether by restricting waterbirth in women of size, they are depriving fat women from an option likely to improve birth outcomes.
The first question that has to be addressed is why waterbirth isn't more common for ALL women, regardless of size. If it's so advantageous, why the resistance to waterbirth in general in the United States? And I'm sure many readers from the fatosphere have some basic questions about waterbirth in general.

In another post soon, we will discuss why some birth facilities have BMI restrictions on who can labor and birth in the water, and whether those restrictions really have any merit or not.

Why the Resistance to Waterbirth?

If laboring in water could help a woman have a shorter, less painful labor, lessen the chances of an episiotomy, and help her be more mobile during the birth......all without the significant risks of epidurals and pain medications...........shouldn't doctors and hospitals be interested in such a low-risk intervention?
You would think doctors and hospitals would be falling all over themselves to embrace waterbirth........but the sad truth is that they're not. Some are still stuck in the technological model of birth, resistant to information about the efficacy and safety of waterbirth.

The following are the main concerns about waterbirth usually brought up by doctors and hospitals, along with research showing lack of harm from these issues, and how they can be dealt with proactively and safely.

How Does The Baby Breathe?

The first concern usually raised is that the baby born in water might inhale the water with its first breath and drown. This concern is addressed in detail at the waterbirth FAQ from Waterbirth International's website. According to them:

There are four main factors that prevent the baby from
inhaling water at the time of birth:

1. Prostaglandin E2 levels from the placenta which cause a slowing down or stopping of the fetal breathing movements. When the baby is born and the Prostaglandin level is still high, the baby's muscles for breathing simply don't work, thus engaging the first inhibitory response.

2. Babies are born experiencing mild hypoxia or lack of oxygen. Hypoxia causes apnea and swallowing, not breathing or gasping.

4. The last important inhibitory factor is the Dive Reflex and revolves around the larynx. The larynx is covered all over with chemoreceptors or taste buds. The larynx has five times as many as taste buds as the whole surface of the tongue. So, when a solution hits the back of the throat, passing the larynx, the taste buds interprets what substance it is and the glottis automatically closes and the solution is then swallowed, not inhaled.

As long as the baby is not in distress and as long as the baby is brought to the surface in a timely manner, research shows that waterbirth is safe. After all, babies were in a liquid in-utero environment already; being born in water simply eases the transition from the uterus to the outside world.
Concern about Infection
Some doctors are concerned about potential risk for infection, even though research shows no greater risk for neonatal infection or maternal infection in waterbirths.
Proper hygiene measures are vital of course, but as long as these are followed, there is no increase in the risk of infection.
Lack of Access to the Perineum
Some doctors object to anything impeding their view of (and access to) the perineum at birth. Of course, less access to the perineum means less chance to cut episiotomies, which is one of the major advantages of waterbirth.
Because they have been trained to be very "hands-on" during delivery, less access to the perineum tends to make doctors feel less in control, and this makes them nervous. But once doctors become experienced in attending waterbirths, they adjust to this approach just fine. It's all a matter of willingness to learn a new approach.

The difficulty of evaluating blood loss during waterbirth is a legitimate concern. In all births, care providers must watch mothers carefully to be sure they are not bleeding excessively after the placenta detaches. Care providers learn how to estimate blood loss in land births, but this is more difficult in water because the water dilutes the blood. As a result, some hospitals forbid waterbirth altogether, while others require women to get out of the water after the baby is born and to birth the placenta on dry land.

However, this is not necessary....most providers learn how to estimate blood loss in waterbirths over time. As with every other obstetric skill, it is acquired through teaching from other experts, observation, and practice. As they learned to estimate blood loss in land births, so they will learn to do so with waterbirths. Again, it simply requires the willingness to learn.

Costs of facilities is another potential concern as well. However, costs of adding permanent waterbirth facilities could be easily accounted for by charging extra for access to them. In addition, waterbirth is immensely popular as a concept; having these facilities and promoting their use should bring extra business to the hospital, thus helping to pay for themselves in time.
However, if the capital outlay for permanent waterbirth tubs is too high, portable pools can be rented by parents instead and brought into the hospital; many companies carry them. With these, a hospital incurs no capital outlay at all.
Conclusion
While many doctors have professed concern about waterbirth due to worries about newborn breathing, infection, lack of immediate access to the perineum, difficulty in evaluating blood loss, and cost of facilities, research has shown that each of these concerns can be addressed. When approached with attention for hygiene and appropriate care guidelines, waterbirth is a safe and reasonable choice.
Waterbirth: A Choice Whose Time Has Come!
More and more hospitals are beginning to embrace the use of water in birth. Many hospitals now offer access to tubs for labor, although they still make the mother get out once she starts pushing. Others have waterbirth "suites" where women can both labor and birth in water.
Waterbirth is increasingly popular particularly in European countries, and can be found as well in many Canadian, Australian, and New Zealand hospitals. In the U.K., the majority of hospitals are reported to have water immersion options, and the government has recommended that all hospitals provide women with the option of a birthing pool. Some third-world countries also have options for waterbirth, particularly in specialty birthing clinics.
Although slower to catch on in the U.S. than abroad, waterbirth has been added to a number of U.S. hospitals as well. Monadnock Community Hospital in Peterborough, New Hampshire was the first hospital in the United States to install a permanent waterbirth pool in 1991. Many other hospitals have followed suit since then.
If your local hospital does not have waterbirth choices available, Waterbirth International can work with you to try and change their policy. They have been successful in a number of facilities already. And of course, you always choose waterbirth at home if your hospital is not amenable.
For more information about waterbirth in general, see the following sites:


There are many other online resources about waterbirth available. Do a simple search and you will find many. If you would like to see what waterbirth might look like, "Birth Day" is a lovely waterbirth video of a Mexican midwife giving birth to her own baby in water with her family nearby. YouTube has a number of brief waterbirth videos as well. And stay tuned to this blog for more pictures of women of size laboring and giving birth in water!!

Posted by Well-Rounded Mama at 3:44 PM

I love Monadnock Hospital!
I had all my children there including 1 waterbirth