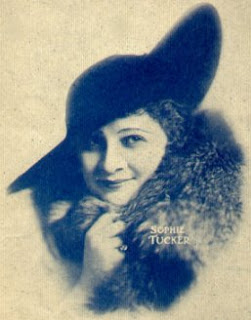 One of my favorite Vaudeville performers was Sophie Tucker (1884–1966).

She was known as the "Last of the Red-Hot Mamas."

She combined an earthy sense of humor with a big rounded body and never let others keep her down.

Sophie was born to a Jewish family in Russia as they were emigrating to the United States. They settled in Connecticut when she was just a baby.

Her original name was Sophia [or Sonia] Kalish, but the family changed its last name to Abuza when it emigrated.  Later, during a brief marriage at age 19, she took her husband's last name, "Tuck," which she later adapted to Tucker for her stage name.

She worked in her family's restaurant business as she grew up, often singing for tips. According to the website, Jewish Women's Archive, she recounted:


I would stand up in the narrow space by the door and sing with all the drama I could put into it. At the end of the last chorus, between me and the onions there wasn't a dry eye in the place.

She was married 3 times in her life but none of her marriages lasted for long. She had a son, Bert (see picture to left), with her first husband.

After they divorced, she left Bert with her parents while she went to New York City to make a career and often sent home money from her earnings to help support them.

She married twice more but each experience was unhappy and left her determined to be independent and happy on her own:


Sophie Tucker married and divorced twice more before giving up on marriage, proclaiming, in song, "There isn't going to be a fourth Mr. Ex/ And I'll be damned if I'm paying any more alimony checks/ I'm living alone and I like it."

She felt that philanthropy was very important and supported many charities. She died at age 82, from lung and kidney ailments.

Sophie Tucker had a long and varied career.

She started in vaudeville with a comic shtick routine, and this vaudeville material influenced her style for the rest of her life.

She was briefly in the Ziegfeld Follies, but was so popular that many of the other performers refused to go on with her because she upstaged them.

In time, she branched out to (rather forgettable) movies, then developed a nightclub act in which she revisited her vaudeville material while also developing more sentimental songs.

In her later years, she was a frequent guest on music and variety shows on TV like The Ed Sullivan Show.

She toured incessantly and performed right up until a few weeks before her death. 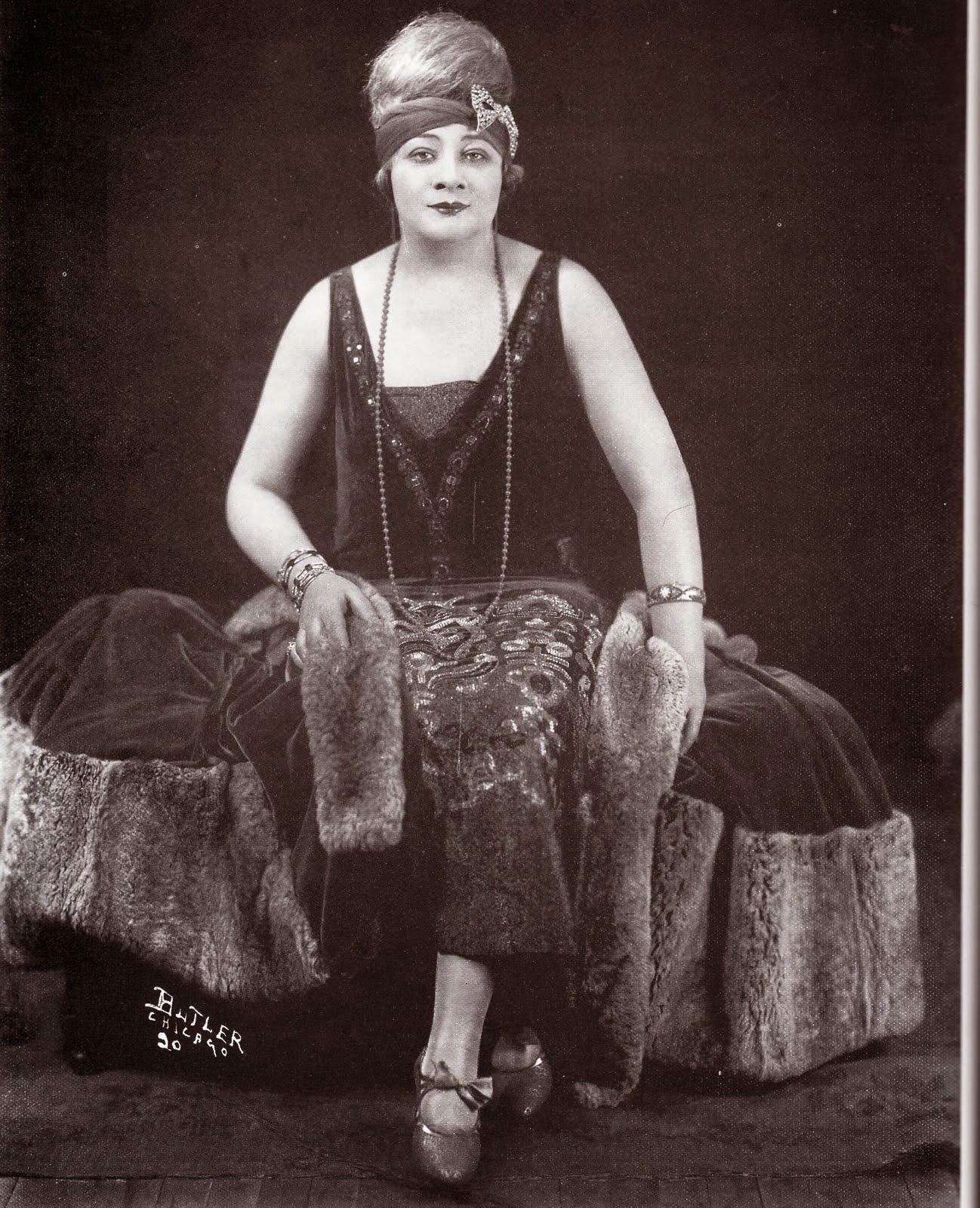 Although actually not that large, Sophie was always considered a big girl in the entertainment world. Even as a young teenager, she was often called "the fat girl." Her early managers were afraid she was "too fat and ugly" to make it on stage.

Rather than let it work against her, she used it as part of her act, and was often self-deprecating about it. As one source comments:


Tucker's stage image emphasized her "fat girl" image but also a humorous suggestiveness. She sang songs like "I Don't Want to Be Thin," "Nobody Loves a Fat Girl, But Oh How a Fat Girl Can Love."

Late in her career she sang a song called, "I'm the 3-D Mama with the Big Wide Screen."

In her most famous song she sang, "You're gonna miss your big fat momma some of these days."

She took a perceived negative and turned it into a positive by playing the underdog and making her audiences root for her. The fact that the "fat and ugly girl" became most famous for her racy, sexy material was an irony not lost on her. 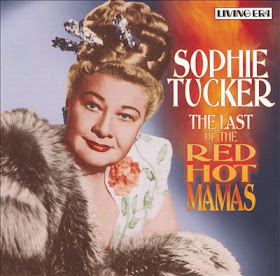 A lot of Tucker's stage personality was based on a bold, brassy, sexy persona, singing songs of humorous raciness.

This earned her the billing, "The Last of the Red Hot Mamas" but her material was just ambivalent enough that it could be interpreted innocently or not-so-innocently, which kept her away from the worst censorship of the time.

Some of her racy songs included, "I May Be Getting Older Every Day (But Younger Every Night)," "When They Start to Ration My Passion, It's Gonna Be Tough on Me," "Making Wicky-Wacky in Waikiki," and "You've Got to Make It Legal, Mr. Siegel."

Singing "The Angle-Worm Wiggle" got her removed from the stage in 1910 but the judge threw out the case.

As her act progressed, Tucker hired Ted Shapiro as her accompanist. He became a long-time part of her act, exchanging witty banter with her in between numbers. He also wrote some of her songs.

She usually used a narrative, half-speaking style in her songs, especially as she aged, but could sing when needed.

Her voice was not very good, but her comic style and brassy delivery influenced later entertainers like Mae West, Ethel Merman, and Bette Midler (who has a stage character named "Soph" and who supposedly named her daughter after Tucker). 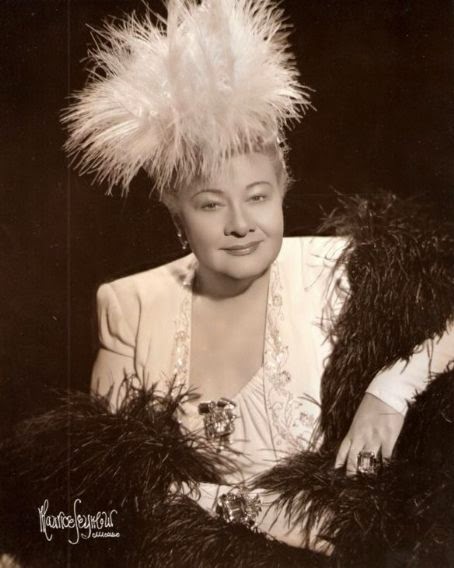 Tucker was fiercely independent after all her failed marriages, and that was often reflected in her repertoire. Some of her songs included "A Good Man Is Hard to Find," "You Can't Deep-Freeze a Red-Hot Mama," "Too Much Lovin'," "Never Let the Same Dog Bite You Twice," "I'm Living Alone and I Like It," "I Ain't Takin' Orders from No One," and "No Man is Ever Gonna Worry Me."

Her songs about independence from men made her popular with women, but men liked her for her bawdy humor. She toured vaudeville houses and music halls through the United States and Europe, taking on a more nostalgic style as the years progressed and vaudeville went out of vogue.

Although she could be quite flamboyant, dressing in furs, jewels, feather boas, and outrageous wigs and hats, she also could effectively deliver serious or highly sentimental songs, earning her the title of "The First Lady of Show Business" by the end of her career. 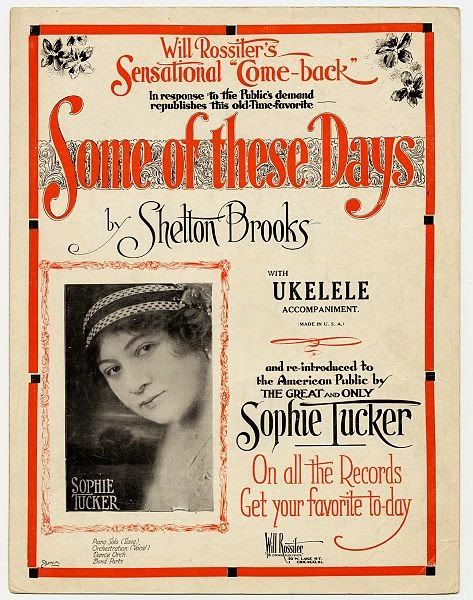 As with many other performers of that era, her early career is deeply entwined with racist practices common to the time, like singing in blackface and doing covers of African-American songs.

In 1907, when Tucker got her first break in vaudeville, they insisted that she perform in blackface. However, one day when her costume trunks got lost, she had to go onstage without it and became more popular without it, thereafter dropping the practice.

She hired African-American composers to write songs for her and sang in a style influenced by ragtime and blues. She hired vaudeville and blues greats Mamie Smith and Ethel Waters to give her singing lessons in those styles. In 1910, African-American composer Shelton Brooks wrote "Some of These Days." Tucker purchased exclusive rights to sing it and it became the signature song of her act and the title of her 1945 autobiography.

Tucker also made a name for herself by singing for Jewish audiences. She sang songs like "My Yiddishe Momme" by Jack Yellen and Lew Pollack, a highly sentimental song about a mother's sacrifice, which she began singing after the death of her own mother. She explained:


Even though I loved the song and it was a sensational hit every time I sang it, I was always careful to use it only when I knew the majority of the house would understand Yiddish. However, you didn't have to be a Jew to be moved by 'My Yiddish Momme.' 'Mother' in any language means the same thing.

In addition to performing, Tucker was active in efforts to unionize professional actors, and was elected president of the American Federation of Actors in 1938. This did not endear her to show business executives but her efforts to gain better conditions made her popular with performers and those working behind the scenes. In one story, the Teamsters were on strike when she died, but the hearse drivers put down their signs temporarily for her funeral procession to honor her memory.

Tucker was a believer in doing good works. According to the Jewish Women's Archive:


Tucker was known for her reverence of the Hebrew principle of tzedaka, charity and acts of good will toward others. In 1945, she established the Sophie Tucker Foundation, donating time, energy, and resources to an ecumenical assortment of causes. Tucker contributed to the Jewish Theatrical Guild, of which she was a life member, the Negro Actors Guild, and the Catholic Actors Guild, as well as the Will Rogers Memorial Hospital, the Motion Picture Relief Fund, synagogues, and hospitals. She supported Israel Bonds, and her foundation endowed a Sophie Tucker chair at Brandeis University in 1955.

In 1959, on the first of several trips to Israel, Tucker dedicated the Sophie Tucker Youth Center at Beit Shemesh in the Judean Hills. Two years later, she sponsored another youth center at Kibbutz Be'eri in the northern Negev near Gaza. In 1962, she sponsored the Sophie Tucker Forest near the Beit Shemesh amphitheater and raised money for another forest. She also donated time and money to numerous hospitals and homes for the aged.

Tucker used her economic independence to empower herself and others, which created tensions in her personal life. Early in her career, Tucker had helped many of the prostitutes who lived in the same rooming houses as she, stashing money from their pimps, noting that, "Every one of them supported a family back home, or a child somewhere." While on tour, she brought her band to play in houses of prostitution for women who'd taken the night off in her honor.

Tucker felt that it was her economic independence that doomed her marriages to Tuck, accompanist Frank Westphal, and manager Al Lackey, all of which ended in divorce. As she explained it: "Once you start carrying your own suitcase, paying your own bills, running your own show, you've done something to yourself that makes you one of those women men like to call 'a pal' and 'a good sport,' the kind of woman they tell their troubles to. But you've cut yourself off from the orchids and the diamond bracelets, except those you buy yourself." 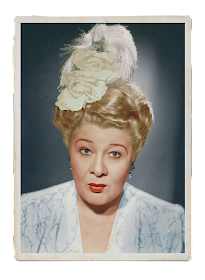 Here is a recording of Sophie performing "Red Hot Mama." 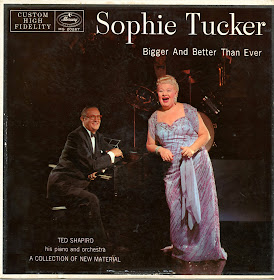