Placental Complications Increase With Prior Cesarean 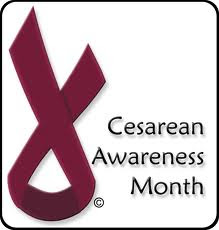 April was Cesarean Awareness Month.  It was sponsored by The International Cesarean Awareness Network (ICAN), which seeks to help support women after cesareans, to raise awareness of the implications of a high cesarean rate, and to keep Vaginal Birth After Cesarean (VBAC) an accessible choice for women.


As a follow-up to Cesarean Awareness Month, let's discuss some of the possible complications of too many cesareans.

The importance of this discussion is highlighted this week by the recent tragic story of a woman who died from complications of Placenta Accreta during her sixth cesarean.

The fact is that each successive cesarean increases the risk for abnormal implantation of the placenta in future pregnancies, and this can be life-threatening to both mother and baby.

This is not to imply that all cesareans are bad; many are truly life-saving and necessary, and many others are probably prudent.  However, many non-indicated cesareans are being done these days. Cesareans are not without risks and this mother's death shows why they should not be done without good reason, especially multiple repeat cesareans.

The extremely high cesarean rates and lack of VBAC access in certain areas of this country and around the world has very distinct public health implications that should not be ignored.

One of those public health implications is the rising incidence of placenta previa and placenta accreta.  As one study summarized:


Placenta accreta is recognized as a catastrophic disease in obstetrics. Diagnosed incidentally, it has been a rare disease in previous decades prior [to] indiscriminate use of cesarean delivery. The World Health Organization has recently highlighted this disease as a new pandemic, which is directly related to patients who have two or more caesarean sections.

One of the most significant risks after having had a cesarean section is abnormal placental implantation in a future pregnancy.  There are several different types of these, which include:

In addition, there is an increased risk of the placenta pulling away from the uterine wall prematurely (called placental abruption).  This, too, can be a serious complication.

The big question is why a subsequent pregnancy after cesarean is at risk for placental issues.  Although the exact mechanism is not clear, most authorities agree that the damage to the lining of the uterus from a cesarean may predispose to placental implantation and/or detachment issues, especially if the fertilized egg implants near the scarred area.

Of course, it's not just cesareans; any damage to the lining of the uterus can predispose to placental issues.  A D&C procedure, whether after a miscarriage or to terminate a pregnancy, can cause problems with the uterine lining.  On the other hand, research differs on whether myomectomy (fibroid removal) does or does not have an association with placental issues.

Even such minor factors as uterine infection, smoking, drug or alcohol use, older age, or many pregnancies can predispose to placental implantation issues.  The theory is that they also damage the uterine lining, causing problems when the next pregnancy implants.

However, it's clear from research that one of the most powerful risk factors for placental issues is a prior cesarean, and that the risk increases as the number of prior cesareans increases.  This means that this condition is often iatrogenic (caused by the physician) and is a preventable risk in many cases.

Research shows that the incidence of placental complications has risen in parallel with the burgeoning cesarean rate.

For example, one recent study on placenta accreta shows that


The incidence of placenta accreta has increased 13-fold since the early 1900s and directly correlates with the increasing cesarean delivery rate.

Another study that did a meta-analysis of the impact of multiple repeat cesareans found:

Now, keep in mind that most women with three or more cesareans still don't experience a previa. However, to increase from an incidence of 1% to 2.8% is a serious increase, given the risks associated with previas.

In other words, the risk for having both previa and accreta jumped from 3-4% to 50-70% if you had three or more prior cesareans.  Clearly, multiple cesareans strongly increase the risk for placental issues in future pregnancies.

Many of these studies use risk ratios to compare the risk. This is useful in some ways, but mothers deserve to know what the exact numerical risk is for these conditions.  A 2006 large study was able to quantify this for women. In their study, they found that accreta was present in:

In addition, they found that a hysterectomy was required in:
Obviously, the more cesareans you have, the more at-risk you are for complications. Complications like previa and accreta really start to rise after 3-4 or more cesareans.

However, sometimes these complications happen when a woman has "only" had one or two prior cesareans.  One study found that having a cesarean for the first birth raised the risk for placental abruption in the second pregnancy by 40% and for placenta previa by 47%.  So although the risks are greatest with 3 or more cesareans, poor outcomes can happen even after only one or two cesareans.  That's why it's important to prevent every cesarean that is not truly medically-indicated.

Even more important is to prevent the automatic repeat cesarean that happens to most women in this country (and in many countries around the world).  In many areas now, once a woman has a cesarean, she is not "allowed" to choose (or is pressured out of) having a subsequent vaginal birth.  And this is what leads to many cases of placental complications.

Most women will not experience severe complications despite undergoing multiple cesareans, but some WILL ─ like the woman who died recently while having her sixth cesarean. Now her children have to grow up without their mother.

This is why it is so important to prevent that first cesarean whenever possible, and why it is absolutely critical for women to have access to VBAC instead of being forced into cesarean after cesarean.

Increase in Incidence of Abnormal Placentation


Placenta accreta is an abnormal adherence of the placenta to the uterine wall that can lead to significant maternal morbidity and mortality. The incidence of placenta accreta has increased 13-fold since the early 1900s and directly correlates with the increasing cesarean delivery rate. The prenatal diagnosis of placenta accreta by ultrasound along with risk factors including placenta previa and prior cesarean delivery can aid in delivery planning and improved outcomes. Referral to a tertiary care center and the use of a multidisciplinary care team is recommended.

Placenta accreta is a rare and potentially life-threatening complication of pregnancy characterized by abnormal adherence of the placenta to the uterine wall. A previously scarred uterus or an abnormal site of placentation in the lower segment is a major risk factor. The aim of this study was to investigate the change in the incidence of placenta accreta and associated risk factors along four decades, from the 1970s to 2000s, in a tertiary south Italian center. We analyzed all cases of placenta accreta in a sample triennium for each decade. The incidence increased from 0.12% during the 1970s, to 0.31% during the 2000s. During the same period, cesarean section rates increased from 17 to 64%. Prior cesarean section was the only risk factor showing a significant concomitant rise. Our results reinforce cesarean section as the most significant predisposing condition for placenta accreta.


Placenta accreta refers to different grades of abnormal placental attachment to the uterine wall, which are characterised by invasion of trophoblast into the myometrium. Placenta accreta has only been described and studied by pathologists for less than a century. The fact that the first detailed description of a placenta accreta happened within a couple of decades of major changes in the caesarean surgical techniques is highly suggestive of a direct relationship between prior uterine surgery and abnormal placenta adherence. Several concepts have been proposed to explain the abnormal placentation in placenta accreta including a primary defect of the trophoblast function, a secondary basalis defect due to a failure of normal decidualization and more recently an abnormal vascularisation and tissue oxygenation of the scar area. The vast majority of placenta accreta are found in women presenting with a previous history of caesarean section and a placenta praevia. Recent epidemiological studies have also found that the strongest risk factor for placenta praevia is a prior caesarean section suggesting that a failure of decidualization in the area of a previous uterine scar can have an impact on both implantation and placentation. Ultrasound studies of uterine caesarean section scar have shown that large and deep myometrial defects are often associated with absence of re-epithelialisation of the scar area. These findings support the concept of a primary deciduo-myometrium defect in placenta accreta, exposing the myometrium and its vasculature below the junctional zone to the migrating trophoblast. The loss of this normal plane of cleavage and the excessive vascular remodelling of the radial and arcuate arteries can explain the in-vivo findings and the clinical consequence of placenta accreta. Overall these data support the concept that abnormal decidualization and trophoblastic changes of the placental bed in placenta accreta are secondary to the uterine scar and thus entirely iatrogenic.

Placental Abruption and Prior Cesarean


The purpose of this study was to determine if placental abruption or previa in women with a history of a prior cesarean delivery (CD) can be predicted. A retrospective cohort study of pregnant women with previous CD was conducted in 17 centers between 1996 and 2000. Women developing placenta previa or abruption in the subsequent pregnancy were compared with those without these complications...Among 25,076 women with prior CD, there were 361 (15 per 1000 births) with placenta previa and 309 (13 per 1000 births) with abruption. The significant risk factors for these complications include advanced maternal age, Asian race, increased parity, illicit drug use, history of spontaneous abortion, and three or more prior cesarean deliveries. Prediction models for abruption and previa had poor sensitivity (12% and 13% for abruption and previa, respectively). In women with at least one prior cesarean delivery, the risk factors for placental previa and abruption can be identified. However, prediction models combining these risk factors were too inefficient to be useful.


...SETTING: All UK hospitals with consultant-led maternity units. POPULATION: Ninety-four women having their fifth or greater MRCS between January 2009 and December 2009, and 175 comparison women having their second to fourth caesarean section...RESULTS:...Women with MRCS had significantly more major obstetric haemorrhages (>1500 ml) (aOR, 18.6; 95% CI, 3.89-88.8), visceral damage (aOR, 17.6; 95% CI, 1.85-167.1) and critical care admissions (aOR, 15.5; 95% CI, 3.16-76.0), than women with lower order repeat caesarean sections. These risks were greatest in the 18% of women with MRCS who also had placenta praevia or accreta. Neonates of mothers having MRCS were significantly more likely to be born prior to 37 weeks of gestation (OR, 6.15; 95% CI, 2.56-15.78) and therefore had higher rates of complications and admissions. CONCLUSIONS: MRCS is associated with greater maternal and neonatal morbidity than fewer caesarean sections. The associated maternal morbidity is largely secondary to placenta praevia and accreta, whereas higher rates of preterm delivery are most likely a response to antepartum haemorrhage.


Rates of cesarean delivery have substantially increased worldwide during the past 30 years. Indeed, almost one-third of deliveries in the United States are cesareans. Most cesareans are safe, and major complications are uncommon. However, there is a "concealed" downside to cesarean deliveries. There are rare but life-threatening morbidities that may occur, which are often overlooked because most cesareans go well. In addition, subsequent pregnancies are fraught with an increased risk of both maternal and fetal complications. The worst of these are associated with placental problems such as previa, abruption, and accreta. The risk dramatically worsens in patients with multiple repeat cesarean deliveries. This article will summarize and highlight the implications of the rising cesarean rate on maternal and fetal morbidity and mortality.